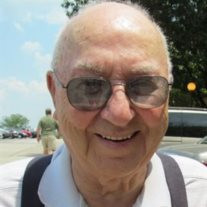 Floyd Lyle Watson, 87, of the Rossville - Alvin area, passed away at 9:23 A.M. Sunday, January 26, 2014 at his residence in rural Alvin, Illinois. He was born June 10, 1926, in Henning IL, the son of Oliver and Minnie (Dilley) Watson. He married Jewel Mae Calvert on October 15, 1947 in Covington, Indiana. She preceded him in death. He is survived by one son, Larry (Rose) Watson of Alvin, IL.; two daughters, Pamela (Sue Betts) Watson of Candor, NY and Julie (Ron) Stow of Thomasboro, IL; eight grandchildren, Alec(Heather) Watson, Toby Watson, Lisa Watson, Ryan (Ashley) Watson, Beth Watson, Erin Watson, Madison Stow and Bayleigh Stow; one great-grandchild, Christina Watson and many nieces and nephews. He was preceded in death by his parents, one son Richard Lyle Watson and siblings, Dale, Orville “Bruz”, Ethel, Mildred and Pearl. Lyle worked on the family farm until 1950. He then began working as a carpenter from 1950 until his retirement, building National Homes. He enjoyed building things and working outdoors. Lyle’s greatest enjoyment was spending time with his family and doing carpentry work for them when needed. The last two years, his son Larry was able to give back to him by moving him into his home in rural Alvin. Memorials may be made to the Donor’s Choice.

The family of Floyd Lyle Watson created this Life Tributes page to make it easy to share your memories.

Send flowers to the Watson family.