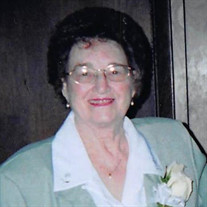 Evelyn Marie Dain, 91, of Hoopeston, IL, passed away at 12:33 P.M. Tuesday December 26, 2017 at Carle Hoopeston Regional Health Center in Hoopeston, IL. She was born April 7, 1926, in Ogdensburg, WI, the daughter of Frank and Lucille Dailey. She married Arlyn Lee Dain on October 25, 1945 in Louisville, KY. He preceded her in death. She is survived by one daughter, Lori (Robert) Dain-Norris of Union, KY; two grandchildren, Sarah Norris and Avery Norris; and one niece, Darlene Larson. She was preceded in death by her parents; one daughter, Saundra Dain; one son, Kevin Dain; five sisters, Mary, Dorothy, Lucy, Maybelle and Eva; and three brothers, Frank, Lester, and Dale. Evelyn first worked at the Hoopeston United Methodist Church as the church secretary, where she also attended. She later worked at the Hoopeston Middle School as the luncheon cashier for thirty years, until her retirement. She was a member of the Spears-Dukes Legion in Rossville, where she served as past president. A visitation will be held 10:00 – 11:00 A.M. Saturday December 30, 2017 at Anderson Funeral Home 427 E. Main St. Hoopeston, IL. The funeral service will follow the visitation and will begin at 11:00 A.M. Saturday at the funeral home, with Pastor Molly Spence-Hawk and Robert Norris officiating. Burial will be held at 1:30 P.M. Sunday December 31, 2017 at Park Cemetery in Ogdensburg, WI. Memorials may be made to the Hoopeston United Methodist Church 403 E. Main St. Hoopeston, IL 60942.

The family of Evelyn Marie Dain created this Life Tributes page to make it easy to share your memories.

Send flowers to the Dain family.