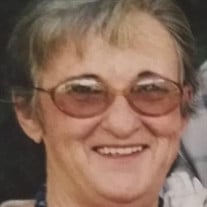 Euna Bray Foster, 85, of Rossville, IL, passed away at 7:12 A.M. Tuesday, October 13, 2020 at Heritage Health Therapy and Senior Living in Hoopeston, IL. Euna was known to many as Mamm or Boone. She was born on December 27, 1934, in Nancy, KY, the daughter of Roscoe & Roenia (Emerson) Bray. She married Robert Gene Foster on September 18, 1954, in Rossville, IL. She is survived by one daughter, Bobbi (Cordie) Phillips of Rossville, two sons, Joe Foster of Alvin and Tom (Susan) Foster of Bellflower; 7 grandchildren, John (Becky) Kinnett, Guy (Jennifer) Foster, Tony (Chelsea) Foster, Tee Billings, Kayla Foster, Logan Foster and Hayden Foster; 5 great-grandchildren, Kaitlyn, Garet, and Blake Kinnett and Eli and Asher Foster; and two great-great-grandchildren, Landon and Kendal Kemp. She is also survived by one brother, John E. Bray of Rossville and many nieces and nephews. She was preceded in death by her husband Robert “Papp” Foster; her parents; one brother, Paul Bray and two sisters, Martha and Delores. Euna was a homemaker most of her life. She enjoyed spending time with her family, but most of all she enjoyed being with her grandchildren and great grandchildren. Throughout the years she would babysit them and see them off to school. She often would be found drinking coffee and smoking a cigarette at the kitchen table. At times, you might find her playing a good game of dice or solitaire on the computer. She will be dearly missed by many. Per her wishes, she will be cremated and no services will be held.

The family of Euna Bray Foster created this Life Tributes page to make it easy to share your memories.

Send flowers to the Foster family.