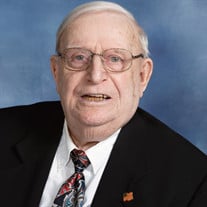 Eugene “Smitty” Smith, 91, went home to be with his Lord and Savior on Saturday, November 16, 2019 at Heritage Health Therapy and Senior Living in Hoopeston. He was born January 9, 1928, in Mackville, KY to John and Catherine Votaw Smith. He married Norma Decker on May 24, 1947 in Milford. He was a graduate of Stockland High School and was a valued citizen of Rossville. Because of his deep love for his Savior, he served in many capacities during his 56 years as a member of First Baptist Church in Hoopeston. Some of those roles included serving as a deacon and chairman of the deacon board, trustee, Sunday School teacher, Youth leader, and Camp Assurance Trustee. He also served on the Stockland School board for 10 years. Eugene and his wife loved adventure. They enjoyed golfing and traveled extensively. During one of their winters in Palm Springs, California, he had the privilege of acting as marshal for the Bob Hope Golf Classic. Cruising was also a favorite pastime of theirs, allowing them to explore Alaska, Hawaii, and several islands in the Caribbean. One of his favorite experiences was being chosen as a contestant on the Price is Right. Working hard was in Eugene’s blood. In addition to farming for 50 years, he and his wife founded Smitty’s Dual Wheel and Tire Service in 1964. It is currently owned and operated by their daughter and son-in-law, Steve and Diana Torbet. Eugene adored his family. Even though he worked hard, he always made spending time with his loved ones a priority. He will be greatly missed by those he left behind, but they take comfort in the fact that they will be reunited with him in Heaven. Survivors include his wife of 72 years, Norma; daughter, Diana (Steve) Torbet of Rossville, IL; three grandchildren, Angela (Justin) Smith of Danville, IL, Heather (Tim) Lehman of Shannon, IL and Jerry Torbet of St. Louis, MO; five great-grandchildren, Nicolas Cruppenink, Karis Lehman, Daniel Lehman, Julia Lehman, and Lydia Lehman; and one sister, Birdie Bond of Watseka, IL. He was preceded in death by his parents; a sister, Louise Wheeler; a brother, Carl Smith; and his two sons, Larry Eugene Smith and Gary Dean Smith. He is now joyfully reunited with them. Visitation will be held from 4:00 – 7:00 P.M. Sunday November 24, 2019 at Anderson Funeral Home 427 E. Main St. Hoopeston, IL. The funeral service will be held at 11:00 A.M. Monday November 25, 2019 at the First Baptist Church 323 E. Seminary Ave., Hoopeston, IL, with Pastor Adam Taubert officiating and assisted by Tim Lehman and Phil Neumann. Burial will follow in Floral Hill Cemetery in Hoopeston. Memorials may be made to Camp Assurance Duplex Project, P.O. Box 18, Georgetown, IL 61846.

Eugene &#8220;Smitty&#8221; Smith, 91, went home to be with his Lord and Savior on Saturday, November 16, 2019 at Heritage Health Therapy and Senior Living in Hoopeston. He was born January 9, 1928, in Mackville, KY to John and Catherine Votaw... View Obituary & Service Information

The family of Eugene "Smitty" Smith created this Life Tributes page to make it easy to share your memories.

Send flowers to the Smith family.