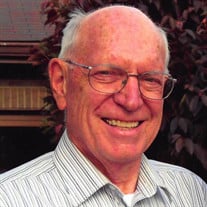 Eugene “Gene” Fredrick Felstehausen, 84, of Rossville, IL, formerly of Hoopeston, IL, passed away at 12:43 P.M. Sunday April 22, 2018 at his home. He was born June 9, 1933, in Clark County, S.D., the son of Fred W. and Ena Lea (Fossum) Felstehausen. He married Donna J. Pew of Watseka, IL, on June 28, 1980 at the Centennial Christian Church in Watseka. She survives in Rossville, IL. He is also survived by two daughters, Susan Felstehausen and husband Harold Golliman of Madison, WI and Kristen Felstehausen and husband Norbert Honermeier of Palatine, IL; five grandchildren, Ian, Hayley, Abigail, Max, and Eric; one sister, Clarine Black of Winner, SD; one brother, Herman (Geke de Vires) Felstehausen of Madison, WI; and several nieces and nephews. He was preceded in death by his parents, Fred & Ena Felstehausen, step-mother, Irma Felstehausen; and brother-in-law, Kenneth A. Black. Gene graduated from Clark, South Dakota High School in 1951. He served in the United States Army from 1953 – 1955 and was stationed in Korea with the 79th Engineering Construction Battalion where he was a mechanics specialist. He studied mechanical engineering at South Dakota State University under the GI Bill where he graduated in 1960. Gene was employed as a product engineer at A.O. Smith Corp in Milwaukee, WI. He then worked for the Brunswick Corp. in Muskegon, MI, designing the ball return and later worked at Food Machinery Corp. in Hoopeston, IL. He left FMC in 1989 to create Felste Company to design and build tooling for the manufacturing and selling of sweet corn cutting knives and machine sharpeners for use in food processing plants. A design that the nieces and nephews recall so well is the model of Donna and Gene’s concrete wall and steel beam home that he built in the country over many years. They have enjoyed his creation, hard work and time for just over two years now. Gene was a long-time member of the First United Methodist Church in Hoopeston, where he led the adult Sunday school class since 1970. From boyhood until the end of his life, Gene was busy in his workshop tinkering, testing, drafting, and building new tools and complicated machines. His ideas never stopped flowing. A visitation will be held 4:00 – 7:00 P.M. Thursday April 26, 2018 at Anderson Funeral Home 427 E. Main St. Hoopeston, IL. The funeral service will be held at 10:00 A.M. Friday April 27, 2018 at the funeral home, with Pastor Cathy Najmon officiating. Burial will follow in Sugar Creek Cemetery in Stockland, IL. Military rites will be accorded by the Hoopeston American Legion Post #384. In lieu of flowers, memorials may be made to the Feed My Lambs lunch program C/O First United Methodist Church 403 E. Main St. Hoopeston, IL 60942.

The family of Eugene "Gene" Fredrick Felstehausen created this Life Tributes page to make it easy to share your memories.

Send flowers to the Felstehausen family.