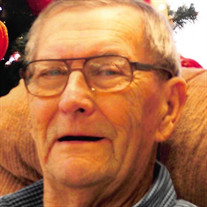 Eugene “Gene” Absher, 91, of Hoopeston, IL, passed away at 2:20 A.M. Wednesday October 26, 2016 at Heritage Health Therapy and Senior Living in Hoopeston. He was born July 26, 1925, in Sumner County, TN, the son Ernie and Laura (Graves) Absher. He married Imodean Taylor on February 2, 1946, in Franklin, KY. She preceded him in death. He is survived by one daughter, Kathleen (John) Slaven of Hoopeston, IL; 2 grandchildren, Jamee Slaven (Scotty Sweeney) and Aimee (Alex) Lugo; 3 great-grandchildren, Aiden, Kole and Karlee Lugo and several nieces and nephews. He was preceded in death by his parents and one brother, Haskel Absher. Gene was a lift truck driver at Joan of Arc for 37 years until his retirement. He enjoyed camping, fishing and watching the Chicago Cubs. He also enjoyed drinking coffee with his friends at McDonald’s and people watching. Gene’s greatest enjoyment was spending time with his family, especially at family cookouts. A visitation will be held 10:00 A.M. – 12:00 P.M. Monday October 31, 2016, at Anderson Funeral Home 427 E. Main St. Hoopeston, IL. The funeral service will follow the visitation and will begin at 12:00 P.M. Monday October 31, 2016 at the funeral home, with Terry Polson officiating. Burial will follow in Floral Hill Cemetery in Hoopeston. Memorials may be made in Gene’s honor to the Alzheimer’s Association Greater Illinois Chapter 207 S. Prospect Road, Suite 1, Bloomington, IL 61704.

The family of Eugene "Gene" Absher created this Life Tributes page to make it easy to share your memories.

Send flowers to the Absher family.