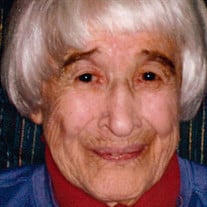 Elizabeth (Hausz) Phelps, 105, of Wellington, IL, passed away at 12:43 A.M. Thursday September 29, 2016 at her home. She was born May 18, 1911, at home in Prairie Green Township, the daughter of Frederick and Belle (Crail) Hausz. She married Lowell “Dode” Phelps in 1931. He preceded her in death in February 1982. She is survived by 10 great-nieces and nephews, Paul Hari, Dale Hari, Cheryl Scannell, David Steward, Brian Steward, Laura Sands, Pauline Mahan, Vickie Sweeley, Susan Simmett and Linda Rummel and one step-nephew, Harry (Sandy) Richards. She is also survived by a special friend, Marshall Savage. She was preceded in death by her parents; one sister, Viola Hari; and four brothers, Michael Hausz, Robert Hausz, Ora John Hausz and infant brother David Hausz. Mrs. Phelps worked at the Federal Milk Market in Chicago, until her retirement. She was also a distributor for Avon and Rawleigh Products. Elizabeth was a member of the Stockland United Methodist Church. She was also a member of the League of American Wheelmen, the Royal Neighbors, the Iroquois County Home Extension, the Milford Senior Woman’s Club and the Milford Maids where she hosted and participated in a fashion show for 12 years. Elizabeth enjoyed reading, gardening, playing cards and visiting with friends and neighbors. She was known for her noodle making and enjoyed teaching others the craft. Elizabeth loved caring for her family farm and touched the lives of many people. A visitation will be held 11:00 A.M. – 1:00 P.M. Thursday October 6, 2016 at Anderson Funeral Home 427 E. Main St. Hoopeston, IL. The funeral service will follow the visitation and will begin at 1:00 P.M. Thursday at the funeral home, with Scott Rosenberger officiating. Burial will follow in Sugar Creek Cemetery in Stockland, IL. Memorials may be made to the Milford District Library 2 S. Grant Ave. Milford, IL 60953 or to the donor’s choice.

The family of Elizabeth (Hausz) Phelps created this Life Tributes page to make it easy to share your memories.