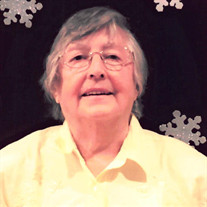 Elizabeth Rose Crozier, 79, of Hoopeston, IL, passed away at 9:31 A.M Monday January 8, 2018, at her home. She was born October 16, 1938, in Potomac, IL, the daughter of Lee Ottley and Lola E. (Groce) Hunter. She married Carroll O. “Speed” Crozier on January 20, 1965 in Danville, IL. He survives in Hoopeston. She is also survived by one daughter, Cheryl (Terry) Mullens of Williamsport, IN; one son, Jerry Ford of Aurora, IL; one sister, Ruby (Michael “Mick”) Farrell of Hoopeston, IL; one grandson, Joseph (Dara) Geyer; two great-grandchildren, Daniel and Braden Geyer; one special niece, Beth Eyrich; one special great-nephew, Charlie Eyrich and many other nieces and nephews. She was preceded in death by her parents; one son, John D. Crozier; and three grandchildren. Elizabeth was a homemaker. She was also an artist and cake decorator. She enjoyed caring for her flower garden, traveling, fishing, and cooking, especially pies. A visitation will be held 4:30 – 7:00 P.M. Thursday January 11, 2018 at Anderson Funeral Home 427 E. Main St. Hoopeston, IL. The funeral service will be held at 11:00 A.M. Friday January 12, 2018 at the funeral home, with Pastor David Meece officiating. Burial will follow in Sugar Creek Cemetery in Stockland, IL. Memorials may be made to the National Kidney Foundation 30 East 33rd Street, New York, NY 10016.

The family of Elizabeth Rose Crozier created this Life Tributes page to make it easy to share your memories.

Elizabeth Rose Crozier, 79, of Hoopeston, IL, passed away at...

Send flowers to the Crozier family.