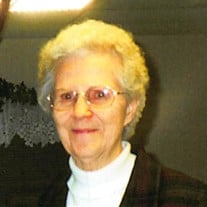 Eleanor Jane Field, 91, of Wellington, IL, passed away at 8:05 A.M. Wednesday June 7, 2017 at Heritage Health Therapy and Senior Living in Hoopeston. She was born July 11, 1925, in Danville, IL, the daughter of Jacob Van and Dorothy Helen (Galloway) Benbow. She married Thomas Field on November 30, 1947, at the residence in which she now resides. He preceded her in death on December 7, 1983. She is survived by two sons, Larry Field of Wellington, IL and Terry (Diane) Field of Wellington, IL; one sister, Carol Chaney of Watseka, IL; two sisters-in-law, Donna Field and Sarah Field; two grandchildren, Mandy (Abraham) Sangha and Travis (Cayla) Field; four great-grandchildren, Isaac, Norah and Asher Sangha and TJ Field and several nieces and nephews. She is also survived by a special friend, Sandra Drullinger. She was preceded in death by her parents; one sister, Marge Lee and two brothers-in-law, Ty Lee and Richard Chaney. Most of Eleanor's life was spent on the farm, tending to her family and often taking lunches to the field. She also worked as a teller at the Wellington State Bank for 25 years, where she enjoyed the customers. She was a member of the Wellington United Methodist Church and the Wide Awake Club. Eleanor enjoyed knitting and crocheting. She also enjoyed attending her family members ballgames and was remembered by many for keeping her own score at every game. Per her wishes, she will be cremated. A visitation will be held 2:00-5:00 P.M. Sunday June 18, 2017 at Anderson Funeral Home 427 E. Main St. Hoopeston, IL. A memorial service will be held at 10:00 A.M. Monday June 19, 2017 at the funeral home, with Pastor Cathy Najmon officiating. Burial will follow in Floral Hill Cemetery in Hoopeston. Memorials may be made to the Wellington United Methodist Church P.O. Box 112 Wellington, IL 60973.

The family of Eleanor Field created this Life Tributes page to make it easy to share your memories.

Send flowers to the Field family.