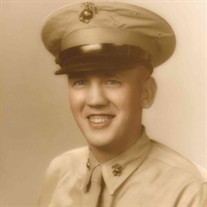 Edward M. Jones, 90, of Hoopeston, IL passed away at 5:20 P.M. Thursday, July 8, 2021 at Heritage Health Therapy and Senior Living in Hoopeston. He was born September 18, 1930, in Rossville, IL., the son of Morris and Vivian (Hall) Jones. He married Phyllis Scott on September 5, 1954 at the Tab Christian Church in Warren County Indiana. She survives in Hoopeston. He is also survived by one daughter, Debra S. Winters of Hoopeston, IL; one son Edward A. “Mudcat” Jones of Hoopeston, IL; one sister – in- law, Phyllis Jones of Kingman, IN; two grandchildren, Rachel Jones and Michelle Jones, three great grandchildren, and one great – great grandchild. Ed was preceded in death by his parents, one infant sister, three sisters, and four brothers. Upon returning from serving in the Marines, Ed worked for Bob Smythe at the City Service Station. He later took a job at Radio Condenser. Ed then worked at FMC for thirty-seven years until his retirement. He was a member of the First Christian Church, the American Legion, the VFW, and the Hoopeston Moose Lodge. Ed enjoyed working and staying busy, volunteering at the Sweetcorn Festival 5K, doing odd jobs for people, and lending a helping hand to anyone that needed it. Most of all, Ed enjoyed spending time with his family and for the last two years enjoyed traveling to Texas for the winter. A visitation will be held 10:00 A.M. – 12:00 P.M. Tuesday, July 13, 2021, at Anderson Funeral Home 427 E. Main St. Hoopeston, IL. The funeral service will follow the visitation and begin at 12:00 P.M. Tuesday, July 13, 2021 at the funeral home with Shawon Wise officiating. The burial will follow at Floral Hill Cemetery in Hoopeston with Military Rites being accorded by the Hoopeston American Legion Post #384. Memorials may be made to the First Christian Church or the Hoopeston American Legion Color Guard. P

The family of Edward M. Jones created this Life Tributes page to make it easy to share your memories.

Send flowers to the Jones family.