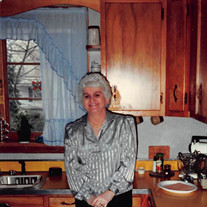 Dorris May (Dennis) Boyer, 89, of Rossville, Il, passed away at 4:00 P.M. Tuesday, July 5, 2016 at the North Logan Health Care in Danville. She was born March 26, 1927, in Danville, IL, the daughter of Garsa L and Gertrude (Hagen) Dennis. She married Wayne E Boyer on November 8, 1948 in Attica , IN. He preceded her in death in 1991. She is survived by one daughter, Sandra Kay (Chuck) Beaulier, of Danville, IL; two sons, David W. (Carla) Boyer of Hoopeston, IL, and John A. (Donna) Boyer of Rossville, Il; three sisters, Dorothy Strawser of Veedersburg, IN, Joann (Jack) Smith of Rockford, IL, and Connie (Bill) Minnick of Veedersburg, IN; one brother, Jack Dennis, of Perrysville, IN; thirteen grandchildren, 18 plus 3 on the way great-grandchildren and numerous nieces and nephews. She was preceded in death by her parents; her sisters, Sue Lawrence and Mary Reynolds, her brothers, Bill Dennis and Darrell Dennis, her sister-in-law, Mona Dennis, and her brother-in-law, Bob Strawser. Dorris was a homemaker and also a factory worker. She worked at GE, Schumacher Electric, and Creative Products. She was an Illinois college basketball fan. Dorris loved spending time and supporting her family in sports, 4H, and farming. She also loved to cook for her family especially making noodles and baking pies. Dorris also loved to sing and write poems. A visitation will be held 11:00 A.M. – 1:00 P.M. Monday July 11, 2016 at Anderson Funeral Home 427 E Main St. Hoopeston. The funeral service will follow the visitation at 1:00 P.M. Monday July 11, 2016, at the funeral home, with Pastor Stephen Beaulier officiating. Burial will be at Rossville Cemetery in Rossville, IL. Memorials may be made to the Vermilion County Fair Board or the Rossville Fire Department in care of Anderson Funeral Home.

The family of Dorris May Boyer created this Life Tributes page to make it easy to share your memories.

Send flowers to the Boyer family.