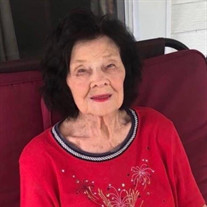 Dorothy I. (Hamilton) Watrous, 99, of Rossville, IL, passed away peacefully at 4:15 P.M. Wednesday November 25, 2020 at Carle Foundation Hospital in Urbana. She was born October 27, 1921, in Hoopeston, IL, the daughter of Lovell H. and Ethel (Stump) Hamilton. She married Clifford Watrous on June 16, 1951 at the Hoopeston United Methodist Church. He preceded her in death on November 7, 1991. She is survived by two daughters, Regina Bushong of Mapleton, IL and Joan (Jim) Jarvis of Bloomington, IL; two sons, Dr. Michael L. (Carol) Watrous of Elgin, IL and John H. Watrous of Rossville, IL; five grandchildren; and fourteen great-grandchildren. In addition to her husband, Dorothy was also preceded in death by her parents and five siblings, Maxine Calkins, Maxwell Hamilton, Marian “Babe” Hamilton, Mary Blundell, and her twin sister, Doris Hathaway. Mrs. Watrous was a 1940 graduate of Rossville High School. She was employed by Inland Steel Company in Chicago during World War II. She also sold Avon and Mary Kay products earlier in her life. Dorothy was a member of the Rossville Civic Women’s Club. She was also a member of the Rossville United Methodist Church and actively cooked chicken and noodles at the annual Fall Fling for many years. She also helped in the kitchen at the church for funeral dinners. She was an excellent cook and her family looked forward to her holiday meals. She was a wonderful wife, mother, grandmother, and great-grandmother who touched many by her Christian love. To her family, Dorothy was a caring homemaker who always put her children first. To those in her church, she was always willing to help. She had a strong Christian faith, having the capacity to forgive others without ever holding a grudge. May she now find peace in the presence of God our Father. A visitation will be held 11:00 A.M. – 1:00 P.M. Tuesday December 1, 2020 at the Rossville United Methodist Church, 116 Maple St. Rossville, IL. The funeral service will follow the visitation and will begin at 1:00 P.M. Tuesday at the church with Pastor Chris Quick officiating. Burial will follow in Rossville Cemetery. Memorials may be made in Dorothy’s memory to the Rossville United Methodist Church, 116 Maple St. Rossville, IL 60963.

Dorothy I. (Hamilton) Watrous, 99, of Rossville, IL, passed away peacefully at 4:15 P.M. Wednesday November 25, 2020 at Carle Foundation Hospital in Urbana. She was born October 27, 1921, in Hoopeston, IL, the daughter of Lovell H. and Ethel... View Obituary & Service Information

The family of Dorothy I. Watrous created this Life Tributes page to make it easy to share your memories.

Send flowers to the Watrous family.