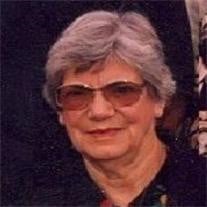 Dorothy Wagoner, 88, of Hoopeston, IL, passed away at 2:37 A.M. Sunday November 25, 2012 at Carle Hoopeston Regional Health Center in Hoopeston, IL. She was born January 17, 1924 in Nancy, KY, the daughter of Esto and Docia (Gaskin) Wilson. She married Joseph P. Wagoner on September 17, 1950 in Hoopeston, IL. He preceded her in death March 3, 2004. She leaves two wonderful children one daughter, Linda Atteberry of Lake St. Louis, MO; one son, Stan (Shirley) Wagoner of Hoopeston, IL; 8 grandchildren, 9 great-grandchildren and many nieces and nephews. She was preceded in death by her parents, one daughter Charlene S. Young, her son-in-law Dale Atteberry, 2 sisters and 6 brothers. Mrs. Wagoner worked at TRW in Hoopeston. She was a member of the Baptist Church in Nancy, KY. After moving to Hoopeston, she began attending the First Christian Church Disciples of Christ and later attended the First Church of God in Hoopeston. Dorothy enjoyed baking pies, quilting, and spending time with her family and attending the kid's sporting events. She also enjoyed playing Bridge and Euchre with her friends at the Hoopeston Community Center.

The family of Dorothy Wagoner created this Life Tributes page to make it easy to share your memories.

Send flowers to the Wagoner family.