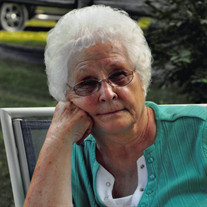 Dorothy Judy, 85, of Rossville, IL, passed away at 3:55 P.M. Friday December 1, 2017 at Heritage Health Therapy and Senior Living in Hoopeston. She was born October 29, 1932 at home in Armstrong, IL, the daughter of James Alvin and Cleo (Hammer) Kitts. She married Ray Judy on October 17, 1948. He preceded her in death. She is survived by three daughters, Kathy (Terry) Richter of Danville, IL, Janet (Ralph) Larkin of Rossville, IL and Linda (Charles) Cremeens of Rossville, IL; one son, Steve (Brenda) Judy of Rossville, IL; one daughter-in-law, Julie Judy of Hoopeston, IL; and many beloved grandchildren, great-grandchildren and great-great-grandchildren. She is also survived by a very special lifelong friend, Dorothy Cremeens Hoggard of Memphis, TN. She was preceded in death by her parents; one son, Larry Judy; one sister, Lois Cade; one brother-in-law, Lawrence Cade and one niece, Nancy Cade. Dorothy was a homemaker who was very dedicated to both her home and her family. She worked as hard in her home as she did on the farm. She was the matriarch of the family with her wisdom and advise. Dorothy had a passion for music and tending to her garden. She also loved cooking for her family, serving her homemade noodles, lasagna and Christmas cookies; you could taste the love in every bite. Her family will forever miss her and their coffee conversations. A visitation will be held 10:00 A.M. – 12:00 P.M. Tuesday December 5, 2017 at Anderson Funeral Home 427 E. Main St., Hoopeston, IL. The funeral service will follow the visitation and will begin at 12:00 P.M. Tuesday at the funeral home with Rev. Matt Stump officiating. Burial will follow in Rossville Cemetery in Rossville, IL. Memorials may be made to Iroquois Memorial Hospice 200 Laird Lane Watseka, IL 60970.

Dorothy Judy, 85, of Rossville, IL, passed away at 3:55 P.M. Friday December 1, 2017 at Heritage Health Therapy and Senior Living in Hoopeston. She was born October 29, 1932 at home in Armstrong, IL, the daughter of James Alvin and Cleo (Hammer)... View Obituary & Service Information

The family of Dorothy Judy created this Life Tributes page to make it easy to share your memories.

Send flowers to the Judy family.