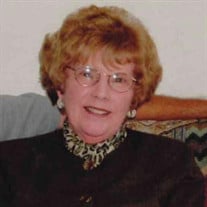 Dorothy Carol Arnold, 87, of Hoopeston, IL, passed away at 2:42 P.M. Tuesday March 8, 2022, at Carle Hoopeston Regional Health Center. She was born August 30, 1934, in Hoopeston, IL, the daughter of Benjamin Grant and Crystal Marie (Anthony) Goodrum. She married Dick Arnold on October 19, 1957, in Danville. He preceded her in death on June 17, 2003. She is survived by one daughter, Lori (Mark) Mott of Heyworth, IL; one son, David Arnold of Chandler, AZ; one sister, Marlene (Chuck) Yablon of Rancho Santa Fe, CA; one brother, Dick Goodrum of Florida; two grandsons, Andy Smith of Grove City, OH and Luke (Megan) Smith of Newburgh, IN; four great-grandchildren, Lola, Shia, Ezra, and Maddox Smith; and many nieces and nephews. In addition to her husband, she was preceded in death by her parents; and one brother, Kenneth Goodrum. Carol worked at the Hoopeston Public Library for 47 years, where she devoted her life to the children of the community. She will be remembered by many for her Friday morning story time. She attended the Chestnut Street Church of Christ. She served as a volunteer at Autumn Fields and at all the schools. Carol enjoyed reading, journaling, and visiting with people. A visitation will be held 4:00 – 7:00 P.M. Monday March 14, 2022, at Anderson Funeral Home 427 E. Main St. Hoopeston, IL. A private family funeral service will be held, and burial will be in Floral Hill Cemetery in Hoopeston. Memorials may be made to the Hoopeston Public Library, 110 N. 4th St. Hoopeston, IL 60942.

The family of Dorothy Carol Arnold created this Life Tributes page to make it easy to share your memories.

Send flowers to the Arnold family.