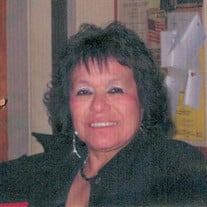 Donna Sue Norton, 69, of Rossville, IL, passed away peacefully with her sons by her side at 1:27 A.M. Sunday January 11, 2015 at Carle Foundation Hospital in Urbana, IL. She was born June 21, 1945, in Tahlequah, Oklahoma, the daughter of William and Ludeviene (Carcarwe) Dreadfulwater. She married John Norton on April 23, 1968 at her parents’ residence in Tahlequah, Oklahoma, he survives. She is also survived by two sons Brian Norton of Paxton, IL and Jeff Norton of Bloomington, IL: two brothers William (Linda Sue) Dreadfulwater and Mike (Beth Marie) Dreadfulwater, both of Tahlequah, OK ; 1 granddaughter, and nieces and nephews, Tangy Acorn, Serita Brown, Kalea Vinson, Shelley Dreadfulwater, Stacy Dreadfulwater, Garrett Dreadfulwater, Kaylea Dreadfulwater, Darla Docken. She was preceded in death by her parents and sister, Shirley Jean Acorn. Donna was very proud of her Cherokee Indian Heritage and a proud citizen of the Cherokee Nation. Donna was a long time employee of Gulbranson Organ/CBS in Hoopeston then later at Creative Products in Rossville. She was a member of the Antioch Church of Christ. Donna enjoyed waiting tables at the Rossville American Legion and helping with their activities. She enjoyed visiting with patrons and watching friends that perform in local bands at the American Legion. Donna also enjoyed gardening at her apartment, cooking, working puzzle books, collecting Nascar and Harley Davidson collectibles mostly Dale Earnhardt Sr. and Kevin Harvick. She also collected Indian Artifacts and Indian Crafts. Donna loved her daily walks and visiting with friends on these walks. She always looked forward to helping out with all community events. A visitation will be held 4:00 – 7:00 P.M. Thursday, January 15, 2015 at Anderson Funeral Home 427 E Main St. Hoopeston, IL. The memorial service will begin at 10:00 A.M. Friday, January 16, 2015 at the Anderson Funeral Home, with Pastor Dan Mikel officiating. She will be cremated per Indian Tradition and her ashes will be scattered on the family’s land that is Indian land in Oklahoma. Memorials may be made to the Rossville American Legion, 104 Thompson St. Rossville, Illinois 60963.

Donna Sue Norton, 69, of Rossville, IL, passed away peacefully with her sons by her side at 1:27 A.M. Sunday January 11, 2015 at Carle Foundation Hospital in Urbana, IL. She was born June 21, 1945, in Tahlequah, Oklahoma, the daughter of William... View Obituary & Service Information

The family of Donna Sue Norton created this Life Tributes page to make it easy to share your memories.

Send flowers to the Norton family.