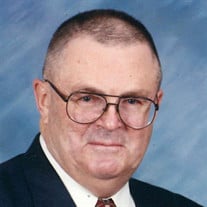 Donald Calvin Westfall, 83, of Savoy, IL, formerly of Cissna Park, IL, passed away at 2:49 A.M. Saturday June 25, 2016 at Heartland Health Care in Paxton, IL. He was born December 8, 1932, in Stockland, IL, the son of Floyd and Dorothy (Busch) Westfall. He married Janet McMurray on September 4, 1965. She survives in Savoy. He is survived by one daughter, Carla Westfall of Paxton, IL; one son, Michael Westfall of Chicago, IL; one brother-in-law, Wilbur Yana of Goodland, IN; 3 nieces; 3 nephews; 4 great-nieces and 5 great-nephews. He was preceded in death by his grandparents, parents and two sisters, Jean Yana and Karen Siedentop. Donald worked at Goodwine Grain and was a farmer. He later worked at Jeld-Wen in Rantoul for 7 years and then ran the carousel at the Market Place Mall in Champaign for 5 years. He served in the United States Army from 1953-1955. Donald attended the Mattis Avenue Free Methodist Church in Champaign. He was a past 4H leader in Claytonville for 27 years and was a member of the Cissna Park American Legion Post #527 and the Danville Masonic Lodge. Donald enjoyed reading, socializing with friends and neighbors and spending time with his family. Cremation rites will be accorded and a visitation will be held 9:00 – 11:00 A.M. Friday July 1, 2016 at Anderson Funeral Home 427 E. Main St. Hoopeston, IL. A memorial service will follow the visitation and will begin at 11:00 A.M. Friday July 1, 2016 at the funeral home, with Pastor Herb Coates officiating. Burial will follow in the Floral Hill Cemetery in Hoopeston. Military rites will be accorded by the Cissna Park American Legion Post #527. Memorials may be made to Heartland Health Care 1001 E. Pells St, Paxton, IL 60957.

The family of Donald Calvin Westfall created this Life Tributes page to make it easy to share your memories.

Send flowers to the Westfall family.