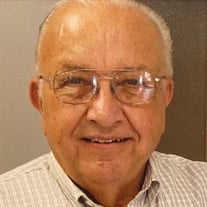 Donald Eugene “Gene” Vandervort, 90, of Rossville passed away Saturday May 16, 2020 at Heritage Health Therapy and Senior Living in Hoopeston. Gene was born October 27, 1929 on a farm near Penfield, Illinois, the son of Russell and Margaret (Hulet) Vandervort. He married the love of his life, Phyllis Austin, on July 30, 1950 at the Rossville Church of Christ. She preceded him in death on March 17, 2020. Survivors include twin daughters, Sharon (Jim) York of Rossville and Karen (Jim) Skinner of Danville; two grandsons, Jamie York and Shaun (fiancée Kourtney) York; three granddaughters, Heather (Tim) Cottingham, Lisa (Jason) Miller, and Carrie (Brodie) Krause; twelve great-grandchildren, Bailey, Austin, Dalton, Sophia, Luka, Cameron (Jacklyn Rogers), Cierra (Matt), Morgan, Owen, Hayden, Lexie, and Lilly; four great-great-grandchildren, Ryder, Eli, Gray, and Knox; and many nieces and nephews. He was also preceded in death by his parents; two sisters and their husbands, Ruth (Bill) Cox and Helen (Tracy) Misner; his step-father, Ross Cronkhite; and two step brothers and their wives, Ross (Gertrude) Cronkhite and Russell (Ruth) Cronkhite. Gene graduated from Rossville High School in 1947. Shortly after his marriage to Phyllis he was drafted into the ARMY in 1951 and served a tour of duty in a battle zone with the Second Division Field Artillery Headquarters. He was issued several medals. Gene was a member of the Rossville Church of Christ, a six-year member of the Rossville-Alvin school board and was on the Rossville Chrisman Park Tree Committee. He was also a national member of The Korean War Association and a member of the local Korean War Veterans Association serving as a Director in 1987. Gene worked as an insurance investigator and adjuster with Yanor and Sodowski Adjusting Company in Danville, where his office was in the former Temple Building. He served as a former Vice-President of The Eastern Illinois Adjusters Association. He was a life-long auto enthusiast who especially enjoyed antique cars and was a fan of racing. Gene and Phyllis were married for 69 years. They lived and raised their family in Rossville. The amount of love they had for each other and their family cannot be measured. Most of their free time was spent attending sporting events or other activities for their girls and grandchildren. They lived life together. Gene was always willing to help anyone who needed it- so thoughtful, loving, and generous. He will be missed dearly by all those whose lives he touched, but we are rejoicing for him to be reunited with his beloved Phyllis. A private burial will be held at Rossville Cemetery. A service will be held at a later date with military rites being accorded by the Hoopeston American Legion Post #384. In lieu of flowers, memorials may be made to the donor’s choice.

Donald Eugene &#8220;Gene&#8221; Vandervort, 90, of Rossville passed away Saturday May 16, 2020 at Heritage Health Therapy and Senior Living in Hoopeston. Gene was born October 27, 1929 on a farm near Penfield, Illinois, the son of Russell and... View Obituary & Service Information

The family of Donald Eugene "Gene" Vandervort created this Life Tributes page to make it easy to share your memories.

Send flowers to the Vandervort family.