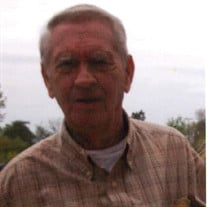 Donald Eugene Senn, 75, of Hoopeston, IL, passed away at 2:50 A.M. on Sunday August 6, 2017 at his home. He was born August 24, 1941, in Grand Island, NE, the son of Ralph and Pearl (Prater) Senn. He married Sharol Mitchell on December 29, 1962 in Danville, IL. She survives in Hoopeston. He is survived by one daughter, Deborah (Jim) Garrett of Brookston, IN; two sons, Mark (Monica) Senn of Romeoville, IL and John (Tina) Senn of Palm Harbor, FL; one sister, Barbara (Robert) Hix of Florence, OR; seven grandchildren, James and Katie Garrett, Alexander, Andrew, Austin, Shelby, and Haley Senn; one great-granddaughter, Georgia Senn; two nieces and two nephews. He was preceded in death by his parents and grandparents. Donald was a truck driver for P.I.E Ryder Trucking Company. After retirement, he worked for Kennekuk County Park and the U of I/Department of Natural Resources, which he thoroughly enjoyed. He served in the United States Naval Reserves. Donald was a past Boy Scouts leader for several years and was a member of the Hoopeston Masonic Star Lodge #709. He enjoyed fishing, boating, and feeding the birds and squirrels in his yard. Donald especially enjoyed spending time with his family and he loved his two dogs, Tyler and Roscoe. Visitation will be held 11:00 A.M. – 1:00 P.M. Thursday, August, 10, 2017 at Anderson Funeral Home 427 E. Main St. Hoopeston, IL. A Masonic Service will be held at 12:30 P.M. The funeral service will follow at 1:00 P.M. Thursday at the funeral home with Pastor Cathy Najmon officiating. Burial will follow at Sunset Memorial Park in Danville, IL. Memorials may be made to the Iroquois Memorial Hospice 200 N. Laird Lane, Watseka, IL 60970 or to the Kennekuk County Park 22296 Henning Rd, Danville, IL 61834.

The family of Donald Eugene Senn created this Life Tributes page to make it easy to share your memories.

Send flowers to the Senn family.