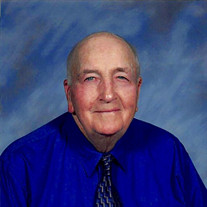 Donald M. McFarland, 94, of Hoopeston, IL, passed away at 8:30 P.M. Tuesday January 10, 2017 at Heritage Health Therapy and Senior Living in Hoopeston. He was born September 12, 1922, in Hoopeston, IL, the son of Arthur and Jennie (Wilkie) McFarland. He married Patricia Duffin on June 28, 1947 in Hoopeston. She preceded him in death on October 19, 2000. He is survived by one son, D. Michael McFarland of Champaign, IL; one sister, Mary Jo Sims of Dayton, OH; one brother, H. Richard "Dick" McFarland of Indianapolis, IN; and three nieces and nephews, Jenny, Marian and David. He was preceded in death by his parents; brother, Wilkie McFarland; an infant brother; two sisters-in-law, Sarah "Sally" McFarland and Rosalie McFarland; and brother-in-law, James "Jim" Sims. Don was an operating engineer at Bowles Construction in Rossville for many years and later helped his brother Dick on the farm. He served in the United States Navy as a Seabee from 1944-1946, serving in the Philippines and New Guinea. He was a member of the Hoopeston American Legion Post #384 and the Hoopeston VFW Buddy Egnew Post #4826, where he helped with many functions. Don was also a member of the First Presbyterian Church in Hoopeston. In his younger years, he enjoyed hunting and fishing. He also enjoyed square dancing with his wife Patricia, watching television and collecting antique vehicles. A visitation will be held 11:00 A.M. - 1:00 P.M. Tuesday January 17, 2017 at Anderson Funeral Home 427 E. Main St. Hoopeston, IL. The funeral service will follow the visitation and will begin at 1:00 P.M. Tuesday at the funeral home, with Rev. Wade Meranda officiating. Burial will follow in Floral Hill Cemetery in Hoopeston. Military rites will be accorded by the Hoopeston American Legion Post #384. In lieu of flowers, memorials may be made to the Alzheimer's Association, 207 S. Prospect Road Suite 1 Bloomington, IL 61704 or The Bobette Steely Hegeler Cancer Care Center at Presence United Samaritans Medical Center, 806 North Logan Avenue Danville, IL 61832

Donald M. McFarland, 94, of Hoopeston, IL, passed away at 8:30 P.M. Tuesday January 10, 2017 at Heritage Health Therapy and Senior Living in Hoopeston. He was born September 12, 1922, in Hoopeston, IL, the son of Arthur and Jennie (Wilkie)... View Obituary & Service Information

The family of Donald M. McFarland created this Life Tributes page to make it easy to share your memories.

Send flowers to the McFarland family.