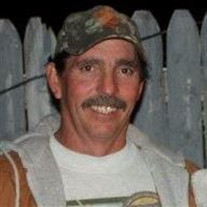 Donald Lee “Don” Gillis, 57, of Rossville, IL, passed away at 5:24 A.M. Tuesday November 13, 2018 at Carle Foundation Hospital in Urbana, IL. He was born October 25, 1961, in Danville, IL, the son of Robert Luther and Betty Lou (Ault) Gillis. He married Rebecca Sue Freeman on November 1, 1980 in Bismarck, IL. She survives in Rossville. He is also survived by two daughters, Amy (Chris) Myers of Bismarck, IL and Emily Anne Scates of Rossville, IL; one son, Michael Gillis of Bismarck, IL; one sister, Debra Delahr of Hoopeston, IL; one brother, Allen (Tami) Gillis of Rossville, IL; four grandchildren, Taylor and Kaitlyn Myers, Mia Gillis, and Josephine Scates; and many nieces and nephews. He was preceded in death by his grandparents, Luther and Myrtle Gillis and Frank and Nova Ault; and his parents. Don was a painter for 37 years. He served as a past little league coach and enjoyed fishing, hunting, and spending time with his grandchildren. A visitation will be held 11:00 A.M. – 1:00 P.M. Saturday November 17, 2018 at Anderson Funeral Home 427 E. Main St. Hoopeston, IL. The funeral service will follow the visitation and will begin at 1:00 P.M. Saturday at the funeral home with Pastor Gary Milton officiating. Burial will follow in the Rossville Cemetery in Rossville, IL. Memorials may be made to the donor’s choice.

The family of Donald Lee "Don" Gillis created this Life Tributes page to make it easy to share your memories.

Send flowers to the Gillis family.