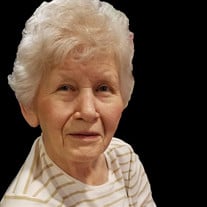 Diane Rentsch Long, 81, of Hoopeston, IL, passed away at 7:00 A.M. Wednesday February 24, 2021 at Heritage Health Therapy and Senior Living in Hoopeston. She was born October 11, 1939, in Cissna Park, IL, the daughter of Jack and Gertrude (Mathis) Rentsch. She married James Edward Long on June 1, 1958, in Hoopeston, IL. He preceded her in death on December 12, 2010. She is survived by two sons, Robert (Jane) Long of Hoopeston, IL and David (Donna) Long of Blacksburg, VA; two sisters, Lois (Jim) Pritchett of Little Rock, AR and Joyce Anderson of Hoopeston, IL; three grandchildren, Christopher, Matthew, and Sydney and several nieces and nephews. In addition to her husband, Diane was preceded in death by her parents; one sister, Marilyn Hemmerling; and one infant brother, Dale Rentsch. Diane spent her life as homemaker, caring for her family. Her hobbies included doing cross stitch, sewing, and square dancing. She loved her family very much and her greatest enjoyment in life was her children and grandchildren. A visitation will be held 1:00 – 2:00 P.M. Monday March 1, 2021 at Anderson Funeral Home 427 E. Main St. Hoopeston, IL. The funeral service will follow the visitation and will begin at 2:00 P.M. Monday at the funeral home, with Pastor Kevin Purdy officiating. Burial will follow in Floral Hill Cemetery in Hoopeston. It is kindly requested that those in attendance of the visitation or services wear a mask and practice social distancing. Memorials in Diane’s memory may be made to Iroquois Memorial Hospice 200 Laird Lane Watseka, IL 60970 or to the Lorraine Foundation P.O. Box 247 Hoopeston, IL 60942.

Diane Rentsch Long, 81, of Hoopeston, IL, passed away at 7:00 A.M. Wednesday February 24, 2021 at Heritage Health Therapy and Senior Living in Hoopeston. She was born October 11, 1939, in Cissna Park, IL, the daughter of Jack and Gertrude (Mathis)... View Obituary & Service Information

The family of Diane Rentsch Long created this Life Tributes page to make it easy to share your memories.

Send flowers to the Long family.