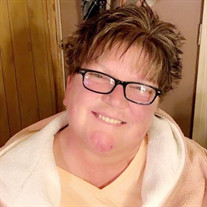 Della D. Bell, 56, of Hoopeston, IL, passed away at 2:20 P.M. Thursday January 20, 2022, at Carle Foundation Hospital in Urbana, IL. She was born October 18, 1965, in Hoopeston, IL, the daughter of Larry and Ellen (High) Bell. Her mother survives in Hoopeston. She is also survived by her significant other of 35 years, Ralph Edward Baker of Hoopeston, IL; two daughters, JoJo Bell of Hoopeston, IL and DeeDee Baker (Peter Kunce) of Hoopeston, IL; one sister, Amber (Jeff) Deck of Hoopeston, IL; two brothers, Larry (Garnet) Bell of Corpus Christy, TX and Robert (Lisa) Bell of Ambia, IN; 5 grandchildren, Ella Livingston, Tanner Wray, Peytan Cooper, Harmonee Griffin, and Khi’ Andre Crockett; and many nieces and nephews. She was preceded in death by her father, Larry Bell Sr.; one sister, Barbara Bell; and many aunts and uncles. Della worked at Schumacher Electric for several years and later at Silgan Containers for nearly 11 years. She enjoyed cooking, baking, and watching Tyler Perry movies as she was an avid movie critic. Most of all, she loved spending time with her family especially her mom and grandkids. Per her wishes, she will be cremated. A visitation will be held 11:00 A.M. – 1:00 P.M. Tuesday February 1, 2022, at Anderson Funeral Home 427 E. Main St. Hoopeston, IL. The memorial service will follow the visitation and will begin at 1:00 P.M. Tuesday at the funeral home with April Jones officiating. No burial will be held. Memorials may be made to Della’s family.

The family of Della D. Bell created this Life Tributes page to make it easy to share your memories.