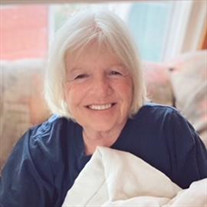 Debra Lynn Hughes, 70, of Rossville, IL, passed away at 7:51 P.M. Saturday, March 5, 2022, at her home, surrounded by her family. She was born June 14, 1951, in Danville, IL, the daughter of Oscar and Lola (Schlensker) Downing. She married Steve Hughes on May 27, 1972, at the St. James United Methodist Church in Danville, IL. He survives in Rossville. She is also survived by two daughters, Tracy (Marc) Jackson of Rossville, IL and Kelly Hughes (Ben Walsh) of Iowa City, IA; one son, Larry K. Hughes of Rossville, IL; one brother, Keith (Toni) Downing of Rossville, IL; her mother-in-law, Edna Hughes; one sister-in-law, Maria (Mike) Verbeke of Rossville, IL; two brothers-in-law, Steve Keele of Greencastle, IN, and Larry D. Hughes of Williamsport, IN; her two grandchildren, Alyvia and Tysun Jackson; and many nieces and nephews. She was preceded in death by her parents, Oscar and Lola Downing; two children, Michael and Jeffery Hughes; her sister, Robin Keele; one nephew, Keith Downing; and her father-in-law, Gene Hughes. Debra retired from the State of Illinois Secretary of States Office. When her children were in school, she was active in their sports and school activities. Her grandchildren were her world, and she loved nothing more than being a grandma to her grandkids and their friends. She loved her family and loved cooking large meals for them on weekends and holidays. Debbie also loved being outdoors and enjoying a cup of coffee on her porch. She had a great sense of humor and contagious laugh that would brighten up any room. She was always able to see the silver lining in any cloud. To know Debbie was to love her, and she will be greatly missed by her friends, family, and all who were blessed to know her. Per her wishes, she will be cremated. A visitation will be held 10:00 – 11:00 A.M. Saturday March 19, 2022, at Anderson Funeral Home 427 E. Main St. Hoopeston, IL. The memorial service will follow the visitation and will begin at 11:00 A.M. Saturday March 19, 2022, at the funeral home with Larry Baughn officiating. Burial will be held at a later date. Memorial donations may be made to the American Cancer Society, P.O. Box 22478, Oklahoma City, OK 73123 or St. Jude Children’s Research Hospital, 501 St. Jude Place, Memphis, TN 38105.

The family of Debra Lynn Hughes created this Life Tributes page to make it easy to share your memories.