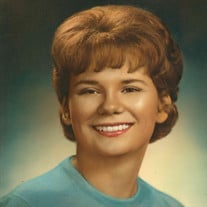 De Etta “Dee” Henk, 69, of Hoopeston, IL, passed away at 7:38 P.M. Saturday December 2, 2017 at Carle Foundation Hospital in Urbana, IL. She was born September 8, 1948, in Danville, IL, the daughter of Derald and Mabel (Saffell) Bartlow. She married William E. Henk on March 8, 1968 in Hoopeston. He preceded her in death on April 5, 2006. She is survived by two sons, Todd (Shelley) Henk of Danville, IL and Scott Henk of Hoopeston, IL; two sisters, Denise Hendricks of Urbana, IL and Debby Bartlow of Hoopeston, IL; 3 grandchildren, Erin, Zach and Isabella Henk; 1 niece, Amber Hendricks of Villa Grove, IL and 2 great-nieces, Kylie of Urbana, IL and Destiny of Villa Grove, IL. She was preceded in death by her parents. De Etta worked as a bookkeeper and secretary for many years. She was a member of the First Christian Church Disciples of Christ in Hoopeston. She was a past girl scout leader, past president of the John Greer PTA and past board member of 15+ years for midget football. De Etta enjoyed flowers, sewing and crocheting, but most of all, she enjoyed attending her children’s and grandchildren’s sporting events. A visitation will be held 4:00 – 6:00 P.M. Thursday December 7, 2017 at Anderson Funeral Home 427 E. Main St. Hoopeston, IL. The funeral service will be held at 10:00 A.M. Friday December 8, 2017 at the funeral home, with Pastor Doug Knapp officiating. Burial will follow in Floral Hill Cemetery in Hoopeston. Memorials may be made to the Lupus Foundation of America, Inc., 2121 K Street NW, Suite 200, Washington, DC 20037.

The family of De Etta "Dee" Henk created this Life Tributes page to make it easy to share your memories.

Send flowers to the Henk family.