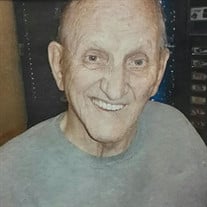 David V. “Dave” Coffman, 80, of Hoopeston, IL, passed away at 8:59 A.M. Sunday March 29, 2015 at Heritage Health Therapy and Senior Living in Hoopeston. He was born August 24, 1934, in Bargerton, TN, the son of L.V. and Ruthie Mae (Gourley) Coffman. He married Anne Stewart on December 25, 1956 in Corinth, Mississippi. Dave is survived by his wife of 58 years, Anne; his children, Mike (Jeri) Coffman of Hartland, WI, Debbie (Dana) Foran of Bement, IL and Stewart (Chrissy) Coffman of Hoopeston, IL; his grandchildren, Chelsea (Pete) Sachs of Windsor, WI, Michael Zillgitt of West Allis, WI, Cameron Coffman of Pewaukee, WI, Cory Coffman of Hoopeston, IL, Christopher Coffman of Hoopeston, IL, Frankie Foran of Bement, IL, Hannah Foran of Bement, IL and Hailey Foran of Bement, IL; two great-grandchildren, Katelyn Sachs of Windsor, WI and Pippin Coffman of Pewaukee, WI. He is also survived by a sister, Larue (Wilbur) Jones of Memphis, TN, a brother Doyle (Linda) Coffman of Bargerton, TN, a sister Etta (James) Habgard of Lexington, TN, a brother Howard (Brenda) Coffman of Bargerton, TN and a brother Jerry (Peggy) Coffman of Bargerton, TN. He was preceded in death by his mother Ruthie Mae and his father L.V.; five brothers, Cebe, Ethridge, J.C., Lavoyd and Alfred and one grandson, Casey Alan Coffman. Dave was the owner/operator of Dave’s Electronics in Hoopeston. He loved all the people he worked with throughout the years. Dave was a huge sports fan. He loved follow Cornjerker and Illini sports and was a huge Nascar fan. Hunting and fishing were also things he enjoyed doing with his family. If he wasn’t on the golf course, you would find him working in his yard and large gardens. Dave graduated from Lexington Tennessee High School and proudly served in the United States Army. He was a member of the VFW and American Legion in Hoopeston. Per his wishes, he will be cremated. A visitation will be held 2:00 – 4:00 P.M. Friday April 3, 2015 at Anderson Funeral Home 427 E. Main St. Hoopeston, IL. A memorial service will follow the visitation and will begin at 4:00 P.M. Friday April 3, 2015 at the funeral home, with Bob Stewart officiating. Following the service, military rites will be accorded by the Hoopeston American Legion and VFW Posts. No burial will be held. Dave’s family would like to thank the staff at Heritage Health for the compassionate care they provided. Memorials may be made to the Hoopeston Area High School to go towards purchasing a brick in Dave’s memory, for their “Brick by Brick” fundraiser. Donations may be mailed to Hoopeston Area High School Attn: Brick by Brick program 615 E. Orange St. Hoopeston, IL 60942.

The family of David V. "Dave" Coffman created this Life Tributes page to make it easy to share your memories.

Send flowers to the Coffman family.