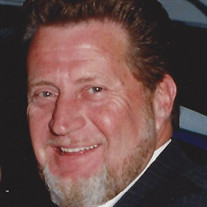 David C. Knake, 71, of Hoopeston, IL, passed away at 10:47 A.M. Friday June 13, 2014 at Carle Foundation Hospital in Urbana, IL. He was born February 8, 1943, in Watseka, IL, the son of Warren and Mary (Tubbs) Knake. He married Kathleen Hebert on June 3, 1995 at Timber Meadows Campground in Goodwine, IL. She survives in Hoopeston. He is survived by daughters, Deborah Stanley of Alanson, MI, Shelli Dennis of Conway, MI and Katie (Donnie) Inman of Paxton, IL; son, Kyle (Stefanie) Anderson of Pana, IL; brothers, Donald Knake of Jackson, TN and Michael (Kebby) Knake of Hoopeston, IL; 8 grandchildren, Haley Dennis, Chandlar Kiogima, Jade Kiogima, Olivia Anderson, Gretta Inman, Belle Anderson, Adelyn Anderson and Pryor Inman; one great-granddaughter, Peyton Dennis and several nieces and nephews. He was preceded in death by his parents and one brother Dennis Knake. Dave worked for the City of Hoopeston as the Superintendent of the Street and Alley Department for many years, until his retirement. He served in the United States Air Force from 1962-1968. He was a member of the Hoopeston American Legion Post #384 and the Fraternal Order of Eagles. Dave had a strong belief in God and enjoyed golfing, gambling, traveling and camping with his family and friends. Memorials may be made to St. Judes Children’s Research Hospital P.O. Box 1000, Dept. 142 Memphis, TN 38148-0142.

The family of David C. Knake created this Life Tributes page to make it easy to share your memories.

Send flowers to the Knake family.