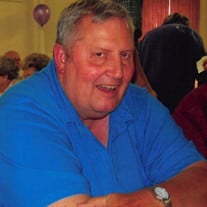 David Dixon, 70, of Wellington, IL, made his journey home on October 5, 2019. He was born April 4, 1949 in Lafayette, IN, the son of Carl and Zolene (Eaton) Dixon. He married Deborah Long on June 14, 1969 at the Wellington United Methodist Church. She survives. He is survived by one daughter, Jenn (Steve) Robinson of Hoopeston, IL; one son, Dana (Amy) Dixon of Wellington, IL; five grandchildren, Cassidy Dixon of Los Angeles, CA, Katie Dixon of Wellington, IL, and Logan, Miles, and Parker Robinson all of Hoopeston, IL; one sister, W. Carol Preston of Mahomet, IL; one brother, Donald (Sharon) Dixon of Hoopeston, IL; two sisters-in-law, Sue (Mark) Davia of Vero Beach, FL and Karen (Stan) Peterson of Hoopeston, IL; two brothers-in-law, John (Jackie) Long of Danville, IL and Steve (Matt) Long of Hoopeston, IL; and two very special cousins, Earl (Cecelia) Dixon of Wellington, IL and Jim (Nancy) Rosborg of Swansea, IL. He is also survived by many nieces, nephews, and cousins. He was preceded in death by his parents; and his father-in-law and mother-in-law, Wally and Nancy Long. Dave graduated from Wellington High School in 1967 where he had a successful basketball career. The highlight being his senior year when he scored a career high of 44 points. He made all state honorable mention in basketball that same year. He attended Danville Junior College, earning an associate degree in Ag Mechanics. He served in the United States Army Reserves from 1969 – 1975. Dave was a member of the Hoopeston United Methodist Church where he was a past member of the board of trustees. He was also a past member of the Wellington School board, Prairie Green Township Trustee, and Iroquois County Career Center. He volunteered for Meals on Wheels and was a life-long Cubs and Illini basketball fan. There were many before, during, and after game phone calls made to his two cousins. Dave’s greatest joy in life was visiting with family, friends, and even complete strangers. His grandkids received many life lessons from him throughout the years. His last words to anyone he was talking to were “be careful now”. Per his wishes, he will be cremated. A visitation will be held 4:00 – 7:00 P.M. Friday October 11, 2019 at Anderson Funeral Home 427 E. Main St. Hoopeston, IL. The memorial service will be held at 11:00 A.M. Saturday October 12, 2019 at the funeral home, with Rev. Wade Meranda and Rev. Ann Schwartz officiating. Burial will follow in Floral Hill Cemetery in Hoopeston. Memorials may be made to the John Greer PTO for their Playground for All Project, 609 W. Main St. Hoopeston, IL 60942.

David Dixon, 70, of Wellington, IL, made his journey home on October 5, 2019. He was born April 4, 1949 in Lafayette, IN, the son of Carl and Zolene (Eaton) Dixon. He married Deborah Long on June 14, 1969 at the Wellington United Methodist... View Obituary & Service Information

The family of David Dixon created this Life Tributes page to make it easy to share your memories.

Send flowers to the Dixon family.