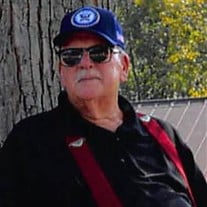 Danny Lee McGinley, 75, of Hoopeston, IL, passed away at 2:49 P.M. Friday December 2, 2016, at his home in Hoopeston. He was born April 28, 1941, in Danville, IL, the son of John and Dorothy (Whittington) McGinley Jr. He married Marilyn Trosper on September 25, 1970, at the First Christian Church Disciples of Christ in Hoopeston. She survives in Hoopeston. He is survived by one daughter, Dorsey McGinley of Whitestown, IN and granddaughter Danielle Lee Harrison of Hoopeston, IL and Danielle’s father, John Harrison; two sons, Steven (Lauren) McGinley of Belton, TX and grandchildren Elijah, Emily and Ragen McGinley of Texas and Dustin Bailey of Hoopeston, IL and several nieces and nephews. He was preceded in death by his parents; one sister, Sylvia (Gene) Simpson and one brother, John (Betty) McGinley. Danny worked as a mechanic at the American Can Co. in Hoopeston for 35 years, until his retirement. He served in the United States Navy and was active on an air craft carrier for two years. He was a member of the Hoopeston American Legion Post 384 and was a past president of the Conservation Club. Danny took a lot of pride in the family home, where 3 generations have lived and also took pride in the appearance of his yard and his truck. He was a devoted fan of the Chicago Cubs and Jeff Gordon. He really enjoyed the outdoors and would always express his great appreciation for God’s artwork while fishing, hunting or camping. He also enjoyed doing yard work, especially mowing; playing poker with his friends and taking care of his father’s truck. Danny was a devoted husband, great provider to his children and a good friend to the people he knew. A visitation will be held 10:00 A.M. – 12:00 P.M. Wednesday December 7, 2016 at Anderson Funeral Home 427 E. Main St. Hoopeston, IL. The funeral service will follow the visitation and will begin at 12:00 P.M. Wednesday at the funeral home, with Rev. Sid Payne officiating. Following the funeral service, cremation rites will be accorded. Military rites will be accorded by the Hoopeston American Legion Post 384 and VFW Buddy Egnew Post 4826 at the funeral home following the service. Memorials may be made to the VA Illiana Health Care System 1900 E. Main St. Danville, IL 61832.

Danny Lee McGinley, 75, of Hoopeston, IL, passed away at 2:49 P.M. Friday December 2, 2016, at his home in Hoopeston. He was born April 28, 1941, in Danville, IL, the son of John and Dorothy (Whittington) McGinley Jr. He married Marilyn Trosper... View Obituary & Service Information

The family of Danny Lee McGinley created this Life Tributes page to make it easy to share your memories.

Send flowers to the McGinley family.