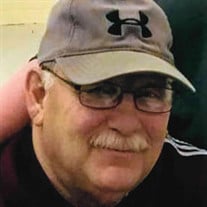 Danny Lee Danner, 74, of Hoopeston, passed this life at 11:28 A.M. Sunday, March 21, 2021 at Accolade Healthcare, Danville. He was born Dec. 3, 1946 in Danville, the son of Louis and Harriet Jean (Winson) Danner. He married Lisa Gocking on March 19, 1984 at Danville. She survives. Also surviving are a daughter, Ashley Danner of Hoopeston; two sons, Sean (Bianca) Danner of Madison, Wisconsin, and Scot (Jen) Danner of Danville; a brother, Gary (Vickie) Danner of Rossville; three grandchildren, Madison, Ella and Felix Danner; a special “adopted” daughter, Carrie Konieczki of Danville; and his chocolate lab, Maggie. He was preceded in death by his parents, his in-laws, Bill and Margaret Gocking, a special cousin, Robert Danner Jr., and his beloved labrador, T-Bone. Danny graduated from Rossville High School in 1966 and had attended Danville Junior College. From 1967-1971, he served with the U.S. Navy Construction Battalion (Seabees) in Southeast Asia during the Vietnam War. He retired in 2007 after a distinguished 32 year career in law enforcement, as an officer and sergeant with the Hoopeston Police Department, and as an officer and Chief of Police for the Village of Rossville. After retirement, he also worked part-time as a bus driver for the Hoopeston Multi Agency. He was an avid sports fan and had coached Little League, Pony League and softball for several years. He also spent many years as an IHSA certified umpire and referee for youth baseball, softball, football, basketball and volleyball. He was a member of the Hoopeston American Legion, the Hoopeston VFW and a former member of the Vermilion County Conservation District Board and the Hoopeston Police Commission. He enjoyed watching all types of sports and spending time with his family. Memorials are suggested to Hooves of Hope, Potomac; or the Dayspring Women’s Shelter, Danville. A visitation will be held 4:00 – 8:00 P.M. Thursday March 25, 2021 at Anderson Funeral Home 427 E. Main St. Hoopeston, IL. The funeral service will be held at 11:00 A.M. Friday March 26, 2021 at the funeral home with Pastor Jeremy McLaughlin officiating. Burial will follow in Rossville Cemetery with military rites being accorded by the Hoopeston American Legion Post #384.

The family of Danny Lee Danner created this Life Tributes page to make it easy to share your memories.

Send flowers to the Danner family.