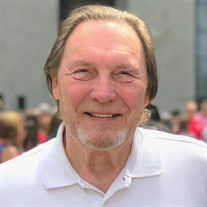 Daniel Joseph Sutter, 79, of Carmel, IN, formerly of Rossville, IL and Murray, KY, passed away at 6:15 A.M. Tuesday April 19, 2022, at Roudebush VA Medical Center in Indianapolis, IN. He was born March 23, 1943, in St. Louis, MO, the son of Edward J. and Audrey (Ortwerth) Sutter. He married Earlene Chiles on June 29, 1963, in St. Louis, MO. She preceded him in death. He is survived by one daughter, Ellen (Rusty) Allen of Westerville, OH; one son, Andrew (Kerri) Sutter of Woodstock, IL; six grandchildren, Matthew (Audrey) Allen and Tyler Allen, Morgan (Adam) Gress, and Michael, Mason, and Meghan Sutter; four great-grandchildren, Kinsey and Adeline Allen and Sawyer and Saylor Sutter; and one niece, Cyndi Clark. He is also survived by his significant other, Maggie Potter of Hoopeston, IL. In addition to his wife, Dan was preceded in death by his parents; his maternal and paternal grandparents; and one sister, Kathy. Dan worked at Howard Industries as the former Plant Manager, until his retirement. He served in the United States Navy from September 15, 1961, to September 14, 1965, where he obtained the rank of Aviation Antisubmarine Warfare Technician Second Class (AX2). Throughout the years, he enjoyed recalling his time served in Spain, Gibraltar, Sicily, Crete, Scotland, the Virgin Islands, Cuba, and Puerto Rico. Dan also served as a former Secretary, President, and Chaplain of the Fraternal Order of Eagles #4464 of Murray, KY. He enjoyed do-it-yourself home projects, golfing, playing pool, and fishing. A visitation will be held 11:30 A.M. – 12:30 P.M. Tuesday April 26, 2022, at Anderson Funeral Home 427 E. Main St. Hoopeston, IL. The funeral service will follow the visitation and begin at 12:30 P.M. Tuesday at the funeral home. Burial will follow in Rossville Cemetery in Rossville, IL. Military rites will be accorded by the Hoopeston American Legion Post #384. Memorial donations may be made to the Dr. Otis Bowen Veterans House, 2669 Cold Spring Road, Indianapolis, IN 46222.

The family of Daniel Joseph Sutter created this Life Tributes page to make it easy to share your memories.

Daniel Joseph Sutter, 79, of Carmel, IN, formerly of Rossville,...

Send flowers to the Sutter family.