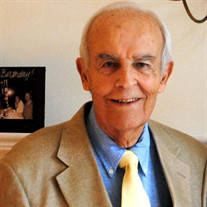 Dale Leonard Singleton, 92, a resident of Fishers, Indiana for the past 24 years, passed away December 29th, 2016, at St. Vincent Hospice in Indianapolis, Indiana. The family will receive visitors on Wednesday, January 4, 2017, from 11 A.M.-1 P.M./CST at Anderson Funeral Home, 427 East Main Street, Hoopeston, Illinois, with funeral service at 1 P.M./CST, with Pastor Cathy Najmon officiating. Graveside services and burial will follow in Floral Hill Cemetery, Hoopeston. Military rites will be accorded by the Hoopeston American Legion Post #384. Dale was born October 18th, 1924, in Hoopeston, Illinois, to Leonard and Nellie (Morgan) Singleton. He is survived by his wife of 58 years, Diane (Jones) Singleton; children Ann (George) Wellen, of Mandeville, Louisiana, and Mark (Laura) Singleton, of Apex, North Carolina, and grandchildren David Wellen, Laura Wellen, Erin Singleton and Michael Singleton. His sister, Ruth Johnson, of Sugar Land, Texas, and nieces and nephews also survive. He was preceded in death by his parents; two sisters, Helen Singleton Goodwin and Gladys Singleton Moore; two nieces and one nephew. Dale graduated from John Greer High School in 1942 and received a B.S. degree in Forestry from Purdue University in 1947. While still in college, he enlisted in the United States Navy and attended Northwestern University Midshipman School in Chicago, where he was commissioned as Ensign. In his Navy service he was later commissioned as Lieutenant (jg). During World War II, he served aboard amphibious fleet ships in the Pacific and China Sea. After he returned from the war and graduated from Purdue, Dale entered the family grain business, Singleton Grain Company, as president and owner until selling the business and retiring in 1987. Dale was committed to service in church, community and business organizations, including First United Methodist Church, Hoopeston, where he was a member, trustee and treasurer, and St. Luke’s United Methodist Church in Indianapolis, where he was a member in recent years. He served as scoutmaster, Boy Scouts of America Troop 18, board member and chairman of Citizens Savings and Loan of Hoopeston, director on City National Bank board, Charlotte Russell Trust, Hoopeston Hospital board and Hubbard Trail Country Club board of which he was also president. Dale was also a member of the American Legion, Rotary Club president and served as a director on the board of the Illinois Grain Dealers Association. He enjoyed golfing, bowling and especially enjoyed following the stock markets. Dale was a loyal friend and mentor and was admired and respected by many. He will be missed greatly by his family and friends. Memorial contributions may be made to St. Vincent Hospice, 8402 Harcourt Road, Suite 210, Indianapolis, Indiana, 46260 or online at https://give.stvincent.org/donate.

Dale Leonard Singleton, 92, a resident of Fishers, Indiana for the past 24 years, passed away December 29th, 2016, at St. Vincent Hospice in Indianapolis, Indiana. The family will receive visitors on Wednesday, January 4, 2017, from 11 A.M.-1... View Obituary & Service Information

The family of Dale Leonard Singleton created this Life Tributes page to make it easy to share your memories.

Dale Leonard Singleton, 92, a resident of Fishers, Indiana for...

Send flowers to the Singleton family.