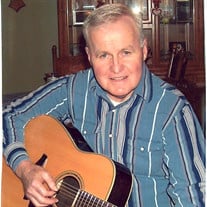 Dale Gilbert Goodwin, 73, of Rossville, IL, passed away at 5:30 A.M. Sunday July 12, 2015 at his home with many family members by his side, after losing his battle with cancer. He was born March 10, 1942, in Eugene, IN, the son of Roscoe Goodwin and Ruby (Dickerson) Goodwin-Bush. He married Debbie Nunn on March 25, 1996 in Las Vegas, NV. She survives in Rossville. He is survived by two daughters, Lori Goodwin of Louisville, KY and Pam (Bradd) Bowman of Perrysville, IN; one son, Alan Goodwin of Paris, IL; two step-daughters, Peggy (T.J.) Ott of Indianapolis, IN and Cassy (John) Sullivan of Westville, IL; one step-son, William (Kathleen) Orcutt of Rossvile, IL; two sisters, Dixie Dunham of Perrysville, IN and Nancy Callahan of Covington, IN; one brother, Donnie Goodwin of Covington, IN; 18 grandchildren; 11 great-grandchildren and several nieces and nephews. He was preceded in death by his mother and step-father, Ruby (Charles) Bush; his father and step-mother, Roscoe (Coreen) Goodwin; brother, Chuck Goodwin; sister, Jean Rily; niece, Karen Doty; nephew, Stanley Goodwin; father-in-law and friend, Reed Nunn Sr.; sister-in-law, Judy Goodwin; two brothers-in-law, Morris Dunham and Bud Callahan. Dale worked at Bohn, which later became Heatcraft. He later became an Iron Worker for Local 379, which joined with Local 22, before his retirement. He attended the Stringtown Church of God in Covington, IN. Dale enjoyed watching Indiana basketball and Nascar races. He also enjoyed riding motorcycles, singing, woodworking and especially spending time with his family. Per his wishes, he will be cremated. Visitation will be held 11:00 A.M. – 12:30 P.M. CST Saturday July 18, 2015 at the Stringtown Church of God 2390 S Stringtown Rd, Covington, IN 47932. A memorial service will begin at 12:30 P.M. CST Saturday July 18, 2015 at the church, with Rev. Keith Klossner officiating. Burial will be held at a later date. Memorials may be made to Mayo Clinic Department of Development 200 First St. SW, Rochester, MN 55905, the American Cancer Society P.O. Box 22718 Oklahoma City, OK 73123-1718 or the donor’s choice.

Dale Gilbert Goodwin, 73, of Rossville, IL, passed away at 5:30 A.M. Sunday July 12, 2015 at his home with many family members by his side, after losing his battle with cancer. He was born March 10, 1942, in Eugene, IN, the son of Roscoe Goodwin... View Obituary & Service Information

The family of Dale Gilbert Goodwin created this Life Tributes page to make it easy to share your memories.

Send flowers to the Goodwin family.