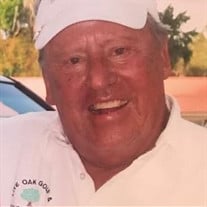 Dale Wesley Glenn went to the Lord on December 23, 2018 to join his wife, Joyce of 56 years. Dale was born on August 28, 1939, in Hoopeston, IL, to Herbert E. and Verna (Cox) Glenn. He was preceded in death by his parents; first wife, Joyce; and brothers, John, Ralph, and Robert. Dale is survived by his wife, Marty; sister, Rozanna (Ray) Estep of Danville, IL; one son, Bobby (Sandy) Glenn of Monticello, IN; and many nieces and nephews. He attended Hoopeston Public Schools, graduating in 1957. Dale received his Bachelor’s Degree in Education from Eastern Illinois University in 1962. The University of Illinois was his next step in his education, where in 1967 he received a Master’s Degree in Education Psychology. In 1973, he received a Master’s Degree in Special Education from Northern Illinois University. And in 1980, received a Master’s Degree in Administration from Illinois State University. After graduating from college in 1962, he coached basketball at Tinley Park, Potomac, and Oakwood before becoming Head Basketball coach at Joliet Central, where his teams won over 300 games, and in 1970 the “Steelmen” played for the State Championship. While at Joliet, Dale was Director of Special Education for Joliet High School District 204, where he pioneered Joliet into the forefront of High School Special Education in the 1970’s, including founding one of the first high school Alternative School programs for “Behaviorally Disturbed” students that nearly every high school district in the country has today. After retiring from coaching in 1981, Dale joined the Will County Sheriff’s department as a youth and gang counselor, eventually retiring in 1997 as a training Sgt for the Will County Aux. An avid tennis player, hunter, and fisherman in his younger days, his hobby became golf after retiring, and he and Joyce enjoyed almost every day at the Fruitland Golf Course with their friends. Dale had 5 “Hole in One” in his career and often shot his age into his 70’s. Dale’s book of poetry, “The Journey” reflects his love for God, parents, spouse, family, and friends. A visitation will be held 4:00 – 7:00 PM Thursday January 3, 2019 at Anderson Funeral Home 427 E. Main St. Hoopeston, IL. The funeral service will be held at 11:00 A.M. Friday January 4, 2019 at Anderson Funeral Home 427 E. Main St. Hoopeston, IL, with Rev. David Bowen officiating. Burial will follow in Floral Hill Cemetery in Hoopeston. In lieu of flowers, donations may be made to the Hoopeston Church of God 1004 E. Orange St. Hoopeston, IL 60942 or the Crescent City (FL) Christian Center.

Dale Wesley Glenn went to the Lord on December 23, 2018 to join his wife, Joyce of 56 years. Dale was born on August 28, 1939, in Hoopeston, IL, to Herbert E. and Verna (Cox) Glenn. He was preceded in death by his parents; first wife, Joyce;... View Obituary & Service Information

The family of Dale Wesley Glenn created this Life Tributes page to make it easy to share your memories.