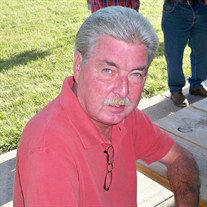 Curtis H. “Scooter” Ellis, 65, of Hoopeston, IL, passed away at 10:25 P.M. Sunday January 11, 2015 at his home in Hoopeston. He was born February 13, 1949, in Danville, IL, the son of Dale Curtis Ellis and Gail Elizabeth (Cain) Ellis Davis. He is survived by two daughters, Casie R. Ellis of Suquaryer Varina, NC and Chrysta Ellis of San Diego, CA; one son, Corey H. (Lisa) Ellis of Beaufort, SC; one sister, Kristy (Art) Kelnhofer of Beaufort, SC; one half-sister, Diane Byrket of Danville, IL; three step-sisters, Donna (Tim) Watson of Hoopeston, IL, Sandy (Ross) Kinnaird of Hoopeston, IL and Jennifer Davis of Hoopeston, IL; seven grandchildren; many nieces and nephews and two cousin’s, Cathy (Tom) Brooks of Rossville, IL and Don Ellis Jr. of Hoopeston, IL. He was preceded in death by his parents; his step-father, Don Davis and his grandparents. Curt was an airbrush artist and owned his own business, Top Gun Studios. His paintings are beautiful and are all over Hoopeston. He painted murals on the wall at Autumn Fields Adult Community in Hoopeston, the VFW and on buildings in downtown Hoopeston. Curt also helped design websites for local organizations and volunteered a lot of his time to help with community organizations and events. Per his wishes, he will be cremated and no services will be held. Memorials may be made to the Hoopeston Animal Shelter 901 W. Main St. Hoopeston, IL 60942, in Curt’s memory.

The family of Curtis H. "Scooter" Ellis created this Life Tributes page to make it easy to share your memories.

Send flowers to the Ellis family.