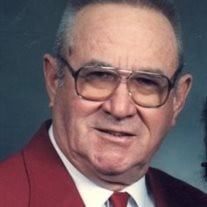 Curtis Willett “Curt” Campbell, 92, of Danville, IL formerly of Hoopeston, IL, passed away at 6:30 A.M. Thursday March 27, 2014, at the VA Illiana Health Care Center in Danville, IL. He was born October 20, 1921 in Rensselaer, IN, the son of James Haddock Campbell and Helen Marie (Willett) Campbell. Curt married Virginia L. Bush on April 12, 1947 in Williamsport, IN. She preceded him in death. Curt is survived by one daughter: Donna (Jim) Bushong of Lafayette, IN; one son: C.J. Campbell of West Lebanon, IN; one brother: Kinch (Rita) Campbell of Rochester, NY; three grandchildren, five great-grandchildren and several nieces and nephews. He was preceded in death by his parents, one brother, James Myron “Pete” Campbell and one dear friend, Mary Ann Sinclair. Mr. Campbell entered the military service upon completion of his graduation. He served in the Army Air Corps from October 29, 1942 until September 25, 1945. Curt was a Prisoner Of War for 14 months in Krems, Austria. Curt served his country well and returned to the Prairie Green Township area where he started farming. He also sold Metropolitan Life Insurance for 18 years. Curt was a member of the Prairie Green Township where he served as treasurer and served on the Wellington Unit 7 School board for several years. Mr. Campbell volunteered in the National Service for Veterans and served as an officer, he also was a life member of the Hoopeston American Legion Post #384 and the Hoopeston VFW Post # 4826. His great passion was farming and spending time with his family and friends. He will be sadly missed by all who knew him and loved him. A visitation will be held 4:00 to 8:00 P.M. (IL Time) Tuesday April 1, 2014 at the Anderson Funeral Home 427 E. Main St. Hoopeston, IL. Funeral service will be held at 11:00 A.M. (IL Time) on Wednesday April 2, 2014 at the Anderson Funeral Home, with Pastor Jeff Johns officiating. Burial will follow service at the Floral Hill Cemetery in Hoopeston, IL., with military rites accorded by the Hoopeston American Legion and Hoopeston VFW Posts. Memorials may be directed to the American Ex-Prisoners of War fund 3201 East Pioneer Parkway #40 Arlington, TX 76010-5396.

The family of Curtis Willett Campbell created this Life Tributes page to make it easy to share your memories.

Send flowers to the Campbell family.