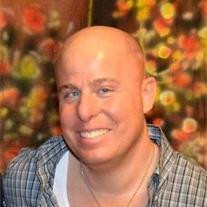 Cortney Alan Zimmerman, 39 of Pekin, formerly of Hoopeston, IL, went home to be with his Lord and Savior at 1:15 am June 27, 2013 due to brain cancer. Cortney was born on October 24, 1973 in Watseka, IL to Emery W. and Linda S. (Olson) Zimmerman. In addition to his parents, he is survived by his younger brother, Brock (Kym) Zimmerman, currently stationed in Monterey, CA. Also surviving are five uncles, four aunts and several cousins. Preceding him in death were his grandparents, Jeff and Lucille Zimmerman and Glenn and Blossom Olson, one uncle, Cy Diskin and one aunt, Maggie (Olson) Diskin. Cortney graduated from Hoopeston Area High School in 1992. After graduation, he served in the U.S. Navy until 1996. He was trained to be a jet engine mechanic at the Navy Technical School in Millington, TN. Cortney was later stationed at Naval Air Station, North Island, located near San Diego, CA. Here he was assigned to Helicopter Anti-Submarine Squadron 6. Cortney worked on SH-60F and HH-60H Seahawk Helicopters. He was qualified as a Lined Division Troubleshooter, Plan Captain, and Landing Signalman Enlisted. Cortney served on two aircraft carriers- the U.S.S. Abraham Lincoln and the U.S.S. Kitty Hawk. While on the Abraham Lincoln, he was part of Operation Southern Watch and Operation Store Hope. While on the Kitty Hawk, he was part of Operation Desert Storm, Southern Watch, and Vigilant Sentinel. After faithfully serving his country, Cortney graduated from Illinois State University in 2000, having earned a degree in Criminal Justice and a minor in Psychology. His fraternity membership was the Tau Kappa Epsilon. Cortney was proud to have been inducted into the National Criminal Justice Honor Society, Alpha Phi Sigma. After a year at McLean County Sheriff's Department in Bloomington, IL, Officer Zimmerman received a federal law enforcement position with the Federal Bureau of Prisons, at the Metropolitan Correctional Center in Chicago. After two years, he transferred to the Federal Correctional Institution in Pekin, IL. As a Senior Officer Specialist, Cortney served on the Disturbance Control Team and the Crisis Support Team and the FCI Honor Guard taking part in the yearly Fallen Officers' Ceremony in remembrance of the federal correctional officers who lost their lives in the line of duty. Cortney received 16 different awards throughout his twelve years of service with the Federal Bureau of Prisons. Cortney loved his country, his family his job and serving others. Most of all, he loved his Lord and Savior, Jesus Christ. Cortney was a member of the Faith Baptist Church in Pekin. He will be remembered as a man of much pride, integrity, loyalty, and courage. His attitude for life was "never give up". Cortney truly exemplified the words: Duty, Honor and Country.

The family of Cortney Zimmerman created this Life Tributes page to make it easy to share your memories.

Send flowers to the Zimmerman family.