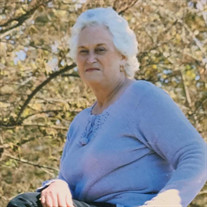 Constance Gail “Connie” Dale, 75, of Wellington, IL, passed away 5:23 A.M. Thursday January 27, 2022, at Carle Foundation Hospital in Urbana, IL. She was born February 6, 1946, in Williamsport, IN, the daughter of LeRoy and Dorna (Crane) Ogborn. She married Leonard Dale on June 13, 2011, in Wellington, IL. He preceded her in death. She is survived by three sons, Joe (Amy) Rieches of Hoopeston, IL, Steve (Jill) Rieches of Danville, IL, and James (Janelle) Bell of Hoopeston, IL; two brothers, Rick (Mary Ann) Ogborn of West Lebanon, IN and Jim Ogborn of Watseka, IL; 8 grandchildren, Nicholas and Megan Rieches, Nicholas Cardenas, Charlie and Samantha Rieches, and Kylee, A.J., and Bentley Bell; three step-grandchildren, Kyle, Brant, and Kade Ramos; and several nieces and nephews. In addition to her husband, she was preceded in death by one sister, Teresa Rife and one brother, Doug Ogborn. Connie worked at Howard’s and later at Jeld-Wen until her retirement. After retirement, she cared for her brother, Jim. She attended the Wellington United Methodist Church. Connie loved spending time with her family and caring for her grandchildren. She also loved watching old Western movies, crocheting, knitting, and putting together puzzles. A visitation will be held 11:00 A.M. – 1:00 P.M. Wednesday February 2, 2022, at Anderson Funeral Home 427 E. Main St. Hoopeston, IL. The funeral service will follow the visitation and will begin at 1:00 P.M. Wednesday at the funeral home. Burial will follow in Floral Hill Cemetery in Hoopeston. Memorials may be made to the Wellington United Methodist Church.

The family of Constance Gail "Connie" Dale created this Life Tributes page to make it easy to share your memories.

Send flowers to the Dale family.