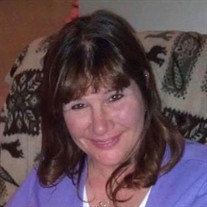 Connie Jean Fink, 58, formerly a resident of Rankin, IL, passed away at 4:22 A.M. Sunday July 18, 2021, at her home. She was born January 11, 1963, in Paxton, IL, the daughter of Donald L. and Valaria Margaret (Sincula) Skinner. She married Kevin Fink in Hoopeston, IL and he survives. She is also survived by one daughter, Paige Hensley of Danville, IL; two sons, Lance Hensley and Chase Hensley both of Danville, IL; two sisters, Linda Loy of Lafayette, IN and Cindy (Gayle) Pate of Greenville, IL; two brothers, Donald J. (Vanessa) Skinner of Mulberry Grove, IL and Terry Skinner of Hoopeston, IL; three grandchildren, Kah’mariontae Cooper, Audra Hensley, and Ariah Hensley; 5 nieces and nephews, Penny Smith, Kimberly Lorentzen, Trinia Riggs, Travis Pate, and Lindsey (Mike) Roeder; 5 great-nieces and nephews; and 2 great great nieces and nephews. She was preceded in death by her parents; late husband, John E. Hensley; grandparents, Nellie Collins and Walter & Francis Skinner; and step grandparents, Spencer and Dorothy Collins. Connie was a mother of three, all of which could do no wrong in her eyes. She was their strength and the person who they could go to without judgement during any trial and tribulation they faced in life. She adored her grandchildren and spent a lot of time with them, spoiling them rotten. Connie’s house had an open-door policy and all of her children’s friends were able to come and go as they pleased. She was often referred to as, “Mama Connie”. Before Connie’s health started to decline and she was still able-bodied, she enjoyed family get-togethers and was especially known for her famous taco salad and chex mix, which were always a hit during the holidays. She spent lots of time watching her favorite shows, Paranormal Witness and Young and the Restless, reading Woman’s World Magazine and doing crossword puzzles. Connie had a very special and close relationship with her mother, Valaria, and oftentimes you could find them together, shopping or watching television. There was not a day they went without talking. Connie leaves behind many family members and friends who are completely devastated, and heart broken by her sudden passing. She will be missed tremendously, and her absence will be felt for years to come. Cremation rites will be accorded, and a graveside service will be held at 11:00 A.M. Monday August 9, 2021, at Rankin Union Cemetery in Rankin, IL. Memorials may be made to the donor’s choice.

The family of Connie Jean Fink created this Life Tributes page to make it easy to share your memories.