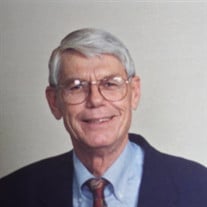 Clyde Albert Otto Runge, 81, of St. Simons Island, GA., passed away at 9:50 A.M. Monday, May 14,2018 at Hospice of Golden Isles in Brunswick, GA. He was born April 24, 1937, the son of Edward and Bertha (Grandt) Runge. He married Nancy Hamilton on August 8, 1959 in Springfield, IL. She survives in St. Simons Island, GA. He is survived by his daughter Elizabeth "Liz” Runge of St. Simons Island, GA.; his son John Runge of Hoopeston, IL.; his brothers Edward (Pat) Runge of College Station, TX and Robert (Sandra) Runge of St. Peter, IL.; his grandchildren, Arlina (Richard) Kaake, Lindsey Crose, Jordan Crose, and Laney Runge; his great grandchildren Gabrielle Kaake, Alisyn Kaake, and Rachel Kaake and five nieces and seven nephews. He was preceded in death by his parents and three brothers, Wendell, Calvin, and Carl Runge. Clyde was an Agriculture and Farm Products Salesman, his last working was at Conagra. Growing up, he attended the St. Peter Lutheran Church in St. Peter, IL and then later attended the Good Shepherd Lutheran Church in Hoopeston, IL. He loved to travel. He enjoyed his morning coffee club with his buddies at the Candy Kitchen in Tuscola, IL. He also enjoyed fishing, doing crossword puzzles, playing golf and collecting more golf balls than he knew what to do with. He was meticulous about his perfect lawn and he was a man who always helped his neighbors. A visitation will be held 1:00 P.M. – 3:00 P.M. Monday, May 21, 2018 at the Anderson Funeral Home 427 E. Main St. Hoopeston, IL. The funeral service will follow the visitation at 3:00 P.M. at the funeral home with Pastor Cathy Najmon officiating. Burial will follow in Floral Hill Cemetery in Hoopeston, IL. In lieu of flowers memorials may be made to the Hospice of the Golden Isles 1692 Glynco Parkway Brunswick, GA. 31525 or to Magnolia Manor 2255 Frederica Rd. St. Simons Island, GA 31522.

The family of Clyde Albert Otto Runge created this Life Tributes page to make it easy to share your memories.

Send flowers to the Runge family.