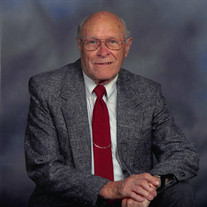 Clarence Edward Catron, 95, of Hoopeston, IL, passed away at 5:10 A.M. Tuesday May 3, 2016 at Carle Hoopeston Regional Health Center in Hoopeston, IL surrounded by his family. He was born February 24, 1921, in Clinton County, Kentucky, the son of Joseph and Victoria (Wray) Catron. He married Jessie Byers and together they had two children, Charlie “Chet” and Ellen Jennetta. He later married Geneva Pinnick and she preceded him in death. He is survived by one son, Charlie “Chet” (Patricia) Catron of Hoopeston, IL; one sister, Barbara (Perry) Rethelford of Hoopeston, IL; one brother, Landon Dale Catron of Mt. Dora, FL and one sister-in-law, Joanne Warner Catron of Sanford, FL. He is also survived by 3 grandchildren, Martin (Abby) Dobkins, Marvin (Jeanne) Dobkins and Michael Catron; 5 great-grandchildren, Jeramy Dobkins, Joshua Dobkins, Jessica (Michael) Davis, Bradley Dobkins and Sabrina Dobkins and one great-great-granddaughter, Lydia Grace Davis. He was preceded in death by his parents; one daughter, Ellen Jennetta Dobkins and three brothers, Gilbert Chester Catron, Ray Kendrick Catron and John William Catron. Clarence worked as a mechanic at Burton Auto Sales in Hoopeston for 25 years. He then worked at Wilmington Community Oldsmobile Pontiac for 16 years and later worked at Lange Auto Sales in Kankakee, until his retirement. Clarence served in the United States Navy and was a member of the Hoopeston Community Church of the Nazarene. He enjoyed fishing and camping in his younger years. Clarence was an avid golfer and enjoyed bowling, which he was remarkably able to do up until last year. He was inducted into the Hoopeston Bowling Association Hall of Fame in 2013. Clarence loved spending time with his children and grandchildren and especially enjoyed drinking coffee with friends and family at Henning’s Root Beer Stand. A visitation will be held 4:00 – 6:00 P.M. Friday May 6, 2016 at Anderson Funeral Home 427 E. Main St. Hoopeston, IL. The funeral service will be held at 11:00 A.M. Saturday May 7, 2016 at the funeral home, with Rev. Wade Meranda officiating. Burial will follow in the Floral Hill Cemetery in Hoopeston, with military rites being accorded by the Hoopeston American Legion Post #384 and the Hoopeston VFW Buddy Egnew Post #4826. Memorials may be made in Clarence’s honor to the Hoopeston Community Church of the Nazarene 402 E. Honeywell, Hoopeston, IL 60942 or the Hoopeston American Legion Color Guard 502 E. Penn St. Hoopeston, IL 60942.

Clarence Edward Catron, 95, of Hoopeston, IL, passed away at 5:10 A.M. Tuesday May 3, 2016 at Carle Hoopeston Regional Health Center in Hoopeston, IL surrounded by his family. He was born February 24, 1921, in Clinton County, Kentucky, the... View Obituary & Service Information

The family of Clarence Edward Catron created this Life Tributes page to make it easy to share your memories.

Clarence Edward Catron, 95, of Hoopeston, IL, passed away at...

Send flowers to the Catron family.