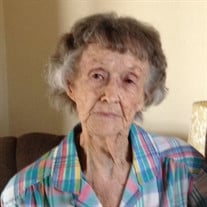 Clara Alice Guffey, 85, of Hoopeston, IL, passed away at 5:30 P.M. Sunday August 17, 2014 at Carle Foundation Hospital in Urbana, IL. She was born January 17, 1929, in Austin, Texas, the daughter of Roy and Ada (Smith) Elsey. She married William Guffey on March 25, 1947 in Austin, Texas. He survives in Hoopeston. She is survived by two daughters, Elsie Aileene (Milton) Houmes of Hoopeston, IL and Charlotte Martin of Rossville, IL; one sister, Jessie Ross of Houston, TX; 5 grandchildren; 8 great-grandchildren; several nieces and nephews and one special niece and nephew, Debbie and Ray Guffey. She was preceded in death by her parents, 1 sister, 3 brothers, 1 brother-in-law and 1 son-in-law. Clara worked at TRW in Watseka and later at Bee Boat in Paxton, before becoming a homemaker. She enjoyed crafts, reading, camping and feeding and watching birds. Clara also enjoyed traveling with her husband and spending time with her family. Memorials may be made to the Baptist Camp Assurance 8364 N 2100 East Rd, Georgetown, IL 61846.

The family of Clara Alice Guffey created this Life Tributes page to make it easy to share your memories.

Send flowers to the Guffey family.