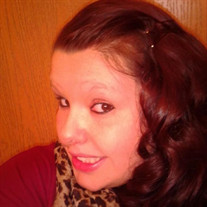 Cierra Jean Hanlin, 32, of Gilman, IL, passed away at 11:40 P.M. Wednesday October 20, 2021, at Advocate Christ Medical Center in Oaklawn, IL. She was born September 20, 1989, in Urbana, IL, the daughter of Ross Hanlin and Cyndi (Swope) Houston. Her father survives in Maine and her mother preceded her in death. She is survived by three daughters, Ataleah Hanlin-Reyes of Westville, IL, Natalie Hanlin-Reyes of Westville, IL, and Nurriah Benjamin of Grand Rapids, MI; two sisters, Markisha (Jason) Wisdom of Hoopeston, IL and Samantha Hanlin of Danville, IL; one brother, Dakota Hanlin of Danville, IL; special friend, Paige Hensley of Westville, IL; seven nieces and nephews, Brittany, Jason Jr., Skylynn, Derrik, Keagen, Kah’mari, and Princeton; one great-niece, Ellie; and one great-nephew, Michael. In addition to her mother, she was preceded in death by her grandparents. Cierra was a homemaker, caring for her family. She enjoyed baking, making crafts, and traveling with her family. There are not enough words in the English language to describe the impact Cierra had on those who were blessed to have known her. She was an excellent mother, who always put her children first. They were the light in her eyes, and she loved them more than life itself. She was an incredible daughter who took care of her mother up until her very last days. She would do anything for her brother and sister, and no matter how many times they bumped heads, it was them against the world. Her friendship was one that people only dream of having. She was always just a phone call away; even at 3 AM she would answer. “Aunt Cereal” was a name given to her by all her nieces and nephews, biological or not. They all adored their Aunt Cereal because she spoiled them rotten. Cierra loved kids, and her motherly instincts made her such a wonderful caregiver to everyone’s children. She did not know a stranger and would give you the shirt off her back even when you didn’t deserve it. She was so forgiving, kind and nurturing. She had the ability to see the good in everyone. Cierra did everything out of love and with good intentions and her soul was too pure for this Earth. Even though God called her home after only 32 short years, the memories she was able to create with all her loved ones will forever leave a lasting impression on our hearts. Per her wishes, cremation rites have been accorded. A visitation will be held 10:00 A.M. – 12:00 P.M. Monday November 8, 2021, at Anderson Funeral Home 427 E. Main St. Hoopeston, IL. The memorial service will follow the visitation and will begin at 12:00 P.M. Monday November 8, 2021, at the funeral home. Burial will follow in Floral Hill Cemetery in Hoopeston. Memorials may be made to the donor's choice.

The family of Cierra Jean Hanlin created this Life Tributes page to make it easy to share your memories.

Send flowers to the Hanlin family.