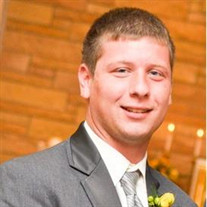 Christopher Wayne Page, 22, of Hoopeston, IL, passed away at 9:42 P.M. Friday January 2, 2015 at Carle Foundation Hospital in Urbana, IL. He was born November 14, 1992, in Kankakee, IL, the son of Curtis W. and Merrilee (Kearns) Page. He is survived by his parents Curtis and Merrilee Page of Hoopeston, IL; three sisters, Amy (Casey) Baker of Bourbonnais, IL, Abby (Neal) Bond of Kankakee, IL and Ashley Page (Sean Meier) of Bradley, IL; paternal grandparents, Truman and Zelda Page of Hoopeston, IL; 2 nieces Emily and Allison and 3 nephews, Bryan, Logan and Gavin, who loved Chris and looked up to him. He is also survived by his girlfriend, Donna Brant. He was preceded in death by his maternal grandparents, Bill and Effie Kearns and his paternal grandmother, Sherry Page. Chris was a route driver at J & R Used Tire Service for 3 years. He enjoyed cars, baseball, working and fishing with his grandpa Truman. Chris especially enjoyed spending time with his family and friends. A visitation will be held 4:00 – 8:00 P.M. Thursday January 8, 2015, at Anderson Funeral Home 427 E Main St. Hoopeston, IL. The funeral service will be held at 11:00 A.M. Friday January 9, 2015 at the funeral home, with Steve Unger officiating. Burial will follow in Sunset Memorial Park in Danville, IL. Memorials may be made to Chris’s family, in which memorials will be used for The National Sweetcorn Festival car show, in his memory.

The family of Christopher Wayne Page created this Life Tributes page to make it easy to share your memories.

Christopher Wayne Page, 22, of Hoopeston, IL, passed away at...

Send flowers to the Page family.