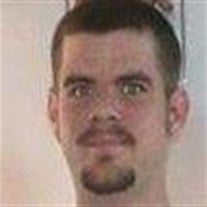 Christopher Thomas Gossett, 32, of Royal, IL, passed away at 4:20 A.M. Saturday June 11, 2016 in Ogden, IL. He was born May 24, 1984, in Danville, IL, the son of Larry Gossett and Karen (Warf) Gossett. He married Kimberly Vilven on June 25, 2011 in Royal, IL. She survives. He is survived by his parents, Larry Gossett and Karen Gossett, both of Hoopeston; one daughter, Alivya Marie Gossett; two sons, Jeffrey Thomas Gossett and Johnathan David Gossett; one sister, Sarah Wallace (Saul Mendoza) of Hoopeston; one brother Gregg (Jeanette) Gossett of Champaign, IL; and two sisters-in-law, Becky and Emily Vilven. He is also survived by his grandmother, Betty Warf of Danville; father-in-law and mother-in-law, Bob and Kathy Vilven; grandparents-in-law, Belva and Marvin Osterbur and Barbara Williams; 4 nieces, Ava, Lyli, Aubree, and Akira and 5 nephews, Aden, Andre, Ali, Miles, and T.J. He was preceded in death by his grandparents, Russell and Jean Gossett and V.T. Warf; grandfather-in-law Gerald Williams; step-mother, Linda Gossett; a special friend Jeffery Wallace; and several other special aunts and uncles. Christopher had previously worked as a CNA and was currently a supervisor of compounding at Full Fill Industries in Henning. He attended St. John’s Lutheran Church. He loved sports, especially the Chicago Cubs, Blackhawks, and Bears. Chris also enjoyed playing video games with his kids, woodworking out of his garage, fishing and spending time with his family. One of Chris’s greatest enjoyments was joking with and teasing people. A visitation will be held 11:00 A.M. -1:00 P.M. Thursday June 16, 2016 at Anderson Funeral Home 427 E. Main St. Hoopeston. The funeral service will follow the visitation and will begin at 1:00 P.M. Thursday at the funeral home. Following the service, per his wishes he will be cremated. Memorials may be made to the family to care for his children, C/O Anderson Funeral Home 427 E. Main St. Hoopeston, IL 60942.

The family of Christopher Gossett created this Life Tributes page to make it easy to share your memories.

Christopher Thomas Gossett, 32, of Royal, IL, passed away at...

Send flowers to the Gossett family.