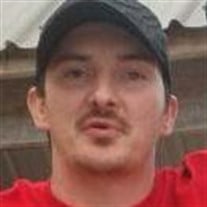 Christopher Thomas Ford, 34, of Springfield, IL, formerly of Hoopeston, IL, passed away at 5:30 P.M. January 31, 2016 in Rural Paxton. He was born January 31, 1982 in Danville, IL, the son of Kim (Ford) Thilmony. He is survived by his mother, Kim (Steve) Thilmony; one daughter, Kandace Marie Ford of Rankin, IL; one son, Mason Thomas Ford of Rankin, IL and one grandmother, Geneva Thilmony. He was preceded in death by his grandparents, Art Ford, Judy Ford, and Jim Thilmony; two uncles, Scott Ford and Donnie Underwood Sr. and one cousin, Lauren Marie Ford. Chris did roofing and construction for Juan Acosta Construction. He was an avid Chicago Bears Fan. He enjoyed going to concerts with friends, fishing, playing pool and flying with his step-father, Steve. Chris loved his family and especially his children. A visitation will be held 4:00 P.M. – 7:00 P.M. Thursday February 4, 2016 at Anderson Funeral Home 427 E Main St. Hoopeston. The funeral service will be held at 11:00 A.M. Friday February 5, 2016 at the funeral home, with Sam Terrell officiating. Burial will be in the Rankin Union Cemetery in Rankin. Memorials may be made to the family C/O Anderson Funeral Home 427 E. Main St. Hoopeston, IL 60942.

The family of Christopher Thomas Ford created this Life Tributes page to make it easy to share your memories.

Send flowers to the Ford family.