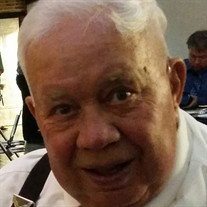 Charles Arthur “Chuck” Whiteman, 88, of Hoopeston, IL, passed away at 1:00 A.M. Saturday October 23, 2021, at Heritage Health Therapy and Senior Living in Hoopeston. He was born February 23, 1933, in Hoopeston, IL, the son of Iverson and Dorothy (Obenland) Whiteman. He married Clara Anna Crose on June 6, 1954, at the Hoopeston United Methodist Church. She survives in Hoopeston, IL. He is also survived by two daughters, Stephanie Myers of Oakwood, IL and Judy (Rodney) Allen of Hoopeston, IL; one son, Steve (Vicki) Whiteman of Stafford, VA; four sisters, Shirley (Harold) Darnall of Rantoul, IL, Carole Ingram of Hoopeston, IL, Elizabeth Abaño of Florida, and Donna Ferguson of Rantoul, IL; three brothers, Donald (Teresa) Whiteman of Noblesville, IN, Iverson “Doc” (Pam) Whiteman of East Lynn, IL, and Thomas (Julie) Whiteman of Spencer, IN; 6 grandchildren, Amanda (Jesse) Grupe, Aimee (Jacob) Grupe, Matthew Whiteman, Samantha (Brandon) Hale, Mark (Alexandra) Allen, and Jessica (Raymond) McConnell; 13 great-grandchildren; 2 great-great-grandchildren; and 34 nieces and nephews. He was preceded in death by his parents; sisters, Juanita Ferguson, Marjorie Elsey and infant sister, Mary; brother, Kenneth Whiteman; and grandson, James Allen. Charles served in the United States Army and was a Korean War veteran. After serving active duty, he served in the Illinois National Guard for 35 years. He served as Past Commander of both the Buddy Egnew VFW Post #4826 and the Hoopeston American Legion Post #384 where he also served on the Color Guard for many years. Chuck was a past Troop Commander of the Illinois National Guard Unit in Danville and was a member of the 40-8 and Korean War Association. He later worked at Radio Condenser in Hoopeston and the Hoopeston Post Office until his retirement. After retirement, Chuck worked at Hamilton – Orr Funeral Home in Hoopeston, working for Gene and William Orr. He also worked many years with David Anderson and Ryan Anderson assisting in many capacities. Chuck served as a past Cub Scout leader, was a volunteer for Meals on Wheels and was a member of the Hoopeston United Methodist Church. A visitation will be held 4:00 – 6:00 P.M. Wednesday October 27, 2021, at Anderson Funeral Home 427 E. Main St. Hoopeston, IL. The funeral service will be held at 11:00 A.M. Thursday October 28, 2021, at the funeral home with Pastor Kathy Murphy officiating. Burial will follow in Johnson Cemetery near Danville, IL, with military rites being accorded by the Hoopeston American Legion Post #384. Memorials may be made to the donor’s choice.

The family of Charles Arthur "Chuck" Whiteman created this Life Tributes page to make it easy to share your memories.

Send flowers to the Whiteman family.