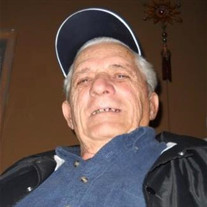 Charles W. “Chuck” Stahl, 81, of Rossville, IL, passed away at 10:28 P.M. Tuesday January 29, 2019 at Carle Foundation Hospital in Urbana, IL. He was born November 3, 1937, in Rossville, IL, the son of Brinton and Anna (Perkins) Stahl. He married Lila Marie Rudy on September 27, 1970, in Danville, IL. She survives in Rossville. He is also survived by one son, Britt Stahl of Bismarck, IL; one step-daughter, Denise Wilson of Sulphur, LA; one step-son, Evan Pennington of Bloomington, IL; 5 grandchildren, Cory (Sarah) Fletcher, Rebecca Wilson, Zachary Garmon, Sebastian Stahl, and Lorenzo Stahl; 5 great-grandchildren, Kylee and Brandon Fletcher and Chase, Kaden, and Trevon Moody; and many nieces and nephews. He was preceded in death by his parents; one twin sister, Charlotte; two sisters, Suzy and Jane; two brothers, Bill and Dick; and one step-brother, Richard. Chuck worked for the Village of Rossville for twenty years and then worked for Halliburton Oil in Lake Charles, LA. He later worked for Danner Construction for many years until his retirement. He served in the United States Army and was a past commander of the Rossville American Legion. He was also involved in erecting the war memorial wall in Rossville. Chuck also served as a past Rossville volunteer fireman. He enjoyed gardening, caring for his peach trees, helping others, and loved spending time with his family. Cremation rites will be accorded, and a graveside service will be held at 11:00 A.M. Wednesday February 6, 2019 at the Danville National Cemetery 1900 E. Main St. Danville, IL. Military rites will be accorded by Danville American Legion Post #210. In lieu of flowers, memorials may be made to the Rossville American Legion 104 Thompson St., Rossville, IL 60963.

The family of Charles W. Stahl created this Life Tributes page to make it easy to share your memories.

Send flowers to the Stahl family.