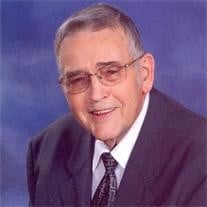 Charles S. "Sid" Johns, 87, of Hoopeston, IL, passed away at 8:39 p.m. Thursday, January 17, 2013 at Carle Foundation Hospital in Urbana, IL. He was born on July 11, 1925 in Marion, IL. He was the son of Charlie and Bertie (Hudgens) Johns. Charles married Barbara Eastman on August 7, 1943. She passed away on December 18, 1997. Charles later married Joann (Gudeman) Young on December 11, 1999 at the Community Church of the Nazarene in Hoopeston, IL. She survives in Hoopeston. Sid is also survived by six daughters, Sandra LaFrance of Bourbonnais, IL, Pamela Okeli of Terre Haute, IN, Paula (Tim) Paxton of Rankin, IL, Sheila (Keith) Abbott of Urbana, IL, Darla (Brian) Nooyan of Green Bay, WI, and Pam (Paul Peterson) Young of Green Bay, WI;two sons, Kevin (Kim) Young of St. Joseph, IL and Keith (Jeannie) Young of Rankin, IL; two sisters, Violet Jeter of Marion, IL and Fran Abney of Topeka, Kansas. He is also survived by 21 grandchildren, 8 great-grandchildren, expecting one more great-grandchild and 6 nephews. Sid was preceded in death by his parents, brother, two infant sisters, two brother-in-laws, and a son-in-law. Sid worked as an Inventory Specialist at Kroger and later owned his own potato chip franchise known as Charles Chips. He then worked at National Gas Pipe Line for many years as a mechanic where he later retired. After his retirement, Sid worked at the Super Car Wash. He was a board member of the Community of the Nazarene Church and the Multi Agency. Sid volunteered his time at the Rankin Food Share and Chris Senior Services in Danville. He also volunteered at the Salvation Army of Kankakee and the Adult Day Care of Kankakee where he installed many life lines for seniors. Sid served in the United States Navy during World War II. During that time he served in Guadalcanal, Okinawa, Guam, China, and Pearl Harbor. He was always in good humor, even after his retirement he was always helping someone. He never met a stranger. Sid loved his family and extended family very much and will be deeply missed by all who knew him.

The family of Charles "Sid" Johns created this Life Tributes page to make it easy to share your memories.