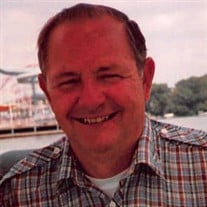 Charles Meredith “Chuck” Roach, 80, of Hoopeston, IL, passed away at 5:40 A.M. Friday September 30, 2016 at the VA Illiana Health Care System in Danville, IL. He was born April 11, 1936, in Lawrence, IN, the son of Joseph L. and Muriel (Davidson) Roach. He married Ethel Elizabeth Smock on June 2, 1954 at Charles’ parents’ home in Rossville, IL. She survives in Hoopeston. He is survived by two daughters, Nancy (Mark) Haas of Rossville, IL and Sandra Cozatt of Danville, IL; one son, Gene (Betty) Roach of Rossville, IL; one sister, Connie Anzola of Orlando, FL; nine grandchildren, Mitch Haas, Jill (Nathan) Burkowski, Lori Haas, Megan (Tim) Cummings, Perry Cozatt, Jesse (Vicky) Roach, Keri (Ethan) Darby, Jarett Roach and Shawn (Stephanie) Tuggle; ten great-grandchildren, Elle and Emma Burkowski, Rylee, Ava and Ellyana Cummings, Bryce and Brea Bushong and Sophi, Cy and Mason Tuggle and several nieces and nephews. He is also survived by a lifelong friend, Gene Holtgrew, whom he met in the Air Force in 1954 and they continued to see and visit each other over the years. He was preceded in death by his parents; three sisters, Cathy Harvey, Janice Simpkins and Madelyn Claypool; two brothers, Hollis and Ronnie Roach; and one grandson, Ian Tuggle. Charles served in the United States Air Force at Chanute Air Force Base from 1954 – 1958 and then became a civil service instructor at Chanute from 1959-1963. He later worked at Hurletron in Danville for 15 years, until his retirement. After retiring, Chuck purchased a farm that he operated until 1996. He was a member of the Spears-Dukes American Legion #733 in Rossville where he had served as past Commander, past Finance Officer and past Chaplain. He attended the Chestnut Street Church of Christ in Hoopeston. Chuck was a history buff especially regarding wars and enjoyed doing genealogy. He also enjoyed renovating homes, traveling with his wife and playing cards with his family and friends. Chuck’s greatest enjoyment was spending time with his grandchildren and teasing them. A visitation will be held 10:00 A.M. – 1:00 P.M. Tuesday, October 4, 2016 at Anderson Funeral Home 427 E. Main St. Hoopeston, IL. The funeral service will follow the visitation and will begin at 1:00 P.M. Tuesday at the funeral home, with Rev. Sid Payne officiating. Burial will follow in Gundy Cemetery in Bismarck, IL, with military rites being accorded by the Hoopeston American Legion Post #384. Memorials may be made to the Chestnut Street Church of Christ 709 E. Chestnut St. Hoopeston, IL 60942 or to the Veteran’s Memorial in Rossville, IL.

The family of Charles Meredith "Chuck" Roach created this Life Tributes page to make it easy to share your memories.

Send flowers to the Roach family.